Step Into the Spotlight

The Top 5 Footwear Picks for Spring 2012

As much of a hard-pressed fashion girl as I am, the first thing that I notice about someone’s outfit are their shoes. My relationship with shoes mimics that of Carrie Bradshaw’s: its a serious condition. The footwear trends coming down the runway for Spring/Summer 2012 catered to an eclectic mix of styles and tastes. This season, showgoers were subjected to everything from neons to snake skins, to an overload of sparkles on each pair stomping down the runway. The overall feel was upbeat betwixt vibrantly colorful details at high altitudes. With such a broad range of shoe choices only one thing is for certain: shoppers will not be thinking about comfort when selecting their new go-to’s. While I fantasize about owning practically every pair off the runway, there were five pairs that stood out against all the others as being worth their high price tags.

Bottega Veneta spans all generations as their sophisticated aesthetic speaks to all ages. Their surefire winners came in the form of a sculpted sling-backs, available in brown, purple, and green. These open toed suede and python heels played with the existing negative space in between the heel of the shoe and the sole of the foot by inserting a multipurpose triangular wedge. This wedge gives extra support to the wearer’s weight while synchronously creating an intriguing silhouette. The contrast between the light brown python and the soft green suede brings to mind the luxurious interior of an old sports car (or something out of the Gucci archives, depending on the viewer’s perspective.) The small shot of the architectural trend, when combined with the built-in comfort, makes them felicitous for all day use.

The next pair of shoes prevails as the antithesis of the refined details of Bottega Veneta. Marc by Marc Jacobs reworked the classic “pumped up kicks” into a commodity every downtown fashionista and hip Brooklynite will be lusting after in the coming season. Their appeal is much the same as that of their predecessors: the Isabel Marant Perkins. They instantly elongate the legs of their wearer and convey the illusion of height thanks to their built in wedge. A massive logo on the front of a shoe would usually ruin the overall effect, but Jacobs’ supply logo works their utilitarian aspect into play, instantaneously raising the cool factor of anyone lucky enough to be wearing them. Their versatility is such that they could just as easily be worn with denim as they could with a dress thanks to their alluring multitude of effulgent hues. 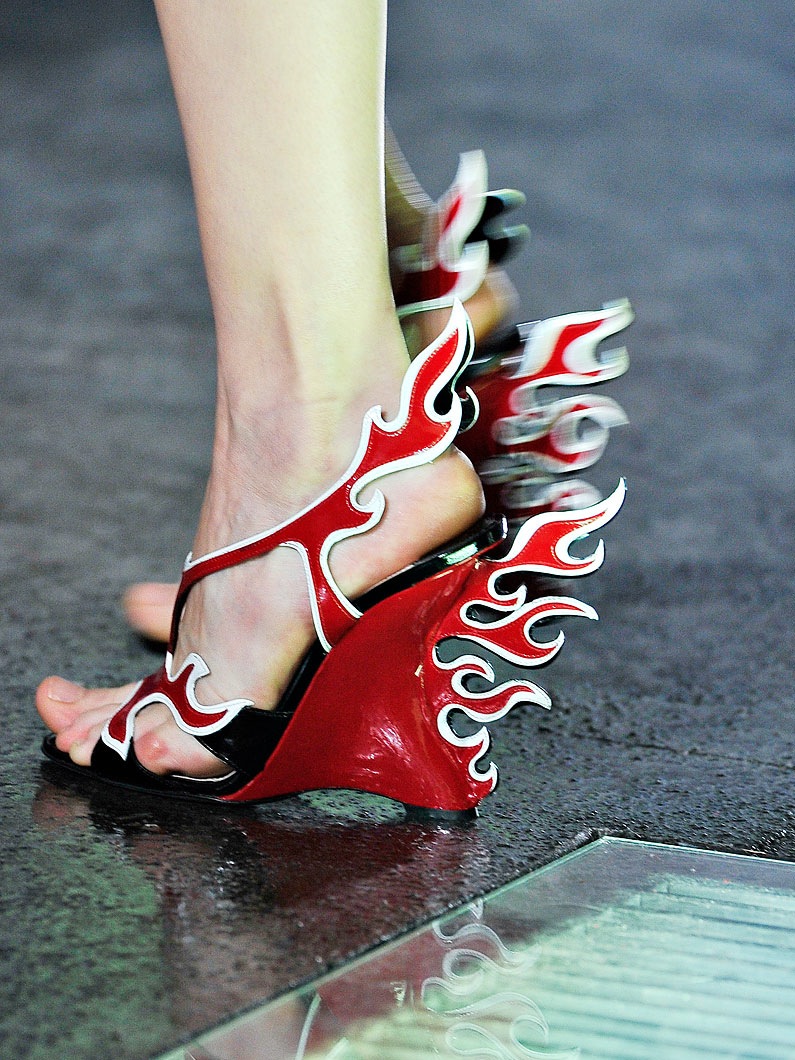 The Prada runway was literally ablaze with Miuccia Prada’s cheeky new collection inspired by the culture of ‘50s Americana. While they will appeal only to certain kinds of people, they are hands down the footwear with the most personality. There are options galore depending on your comfort zone: for confident players there are crazy out-there versions which boast multi-colored leather flames and built in hot-rod tail ends, and for the more commercial of us, a safe but interesting combination show of the traditional red leather Prada heel in the front, and in the back the added retro Cadillac embellishment. A sort of stiletto mullet, if you will. Each pair is meant to explore the relationship between a woman and her cars, by transporting you back to the notions of a 1950s drive-in. Even if vintage taillights aren’t you speed, you are sure to change your mind once you see the ingenious way Miuccia infused all the sexiness and glamour of an old motorcar into one killer pair of shoes.

The king of street style, Alexander Wang, was also looking to the past to create a sexy shoe of the future. Keeping true to his grungy club kid roots, Wang generated shoes worthy of the cult following who are sure to snap up every pair in a matter of hours. The urbane heels have a clear ‘90s influence apparent in both their shape (pointed, strappy and low to the ground) and their material (a slightly messy fish scale to balance out the girly detail of the back loop). They come in three colors, my favorite being the darker blue as there seems to be something about them that is inherently nostalgic of batman or a vintage scooby doo cartoon. Wang says the collections was inspired by aerodynamics and nascar, which would explains the sculptural cutouts and pointed closed toe. Just like any good Alexander Wang dress, the subtle sex appeal lies in the details. 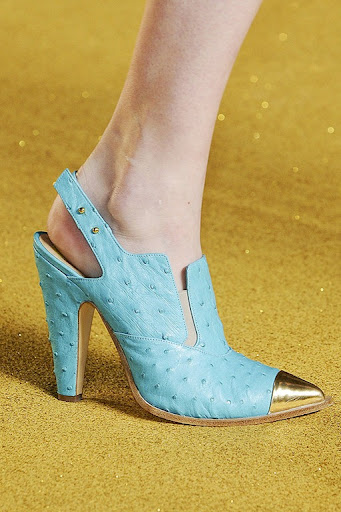 Thakoon took a trip around the world and came right back to New York to find his east meets west mentality for spring. He took the most iconic piece of the Western frontier, the cowboy boot, and reworked it into shoes that even the most sophisticated of socialites will want to kick on. The sturdy ankle boot (albeit unrecognizable from its early Americana counterparts) is a statement in its aquamarine shade and gold tipped toe. Paired with jeans or simple black, they are ready for the masses, but paired with the East Indian textiles as seen on the runway, they’re ready for some serious editorial work, a fair representation for the season’s shoes as a whole.

how pretty the fire heels are!

Thanks for visiting my blog.
I liked a lot the first shoes.

cool shoes but nothing I would want :D

the shoes in the first image are amazing!

Love the Miu Miu ones :)