It has always been every guy’s dream to see a supermodel in the shower. That supermodel is Abbey Lee Kershaw, but no she is not naked and she is not in a porn video, she is in the Rag & Bone Spring/Summer 2011 ad, and those guys are Rufus Wainwright and David Neville. As the internet is rapidly becoming the primary outlet for all forms of communication, it begs the question: Is traditional advertising becoming irrelevant? If a fashion brand can publicize its name without paying absurd amounts of money to publish an ad, it would seem wasteful not to expedite the opportunity. Not only do bloggers help their favorite young designers gain free publicity, but designers themselves are taking advantage of social media outlets available at the click of a button. Rag & Bone, the brainchild of designer-duo Marcus Wainwright and David Neville, prove that innovative DIY projects can be just as effective as a five-digit expense campaign. The downtown brand has earned serious street cred for their guerrilla-style first campaign featuring fashion’s coolest supermodels.

Taking notice of fashion’s most recent trend featuring that coveted model-off-duty styles Wainwright and Neville decided to let their loveliest girls take over.
“We wanted to let them interpret the brand” explained Wainwright. Given full creative control over their photos, with the exception being they must be wearing Rag & Bone, Abbey Lee Kershaw, Sasha Pivovarova, Lily Aldridge and Edita Vilk Eviciute got clever with their cameras. As street style photographers have keenly observed, each model has developed a distinct style that she is more than willing to share after years of being treated with little more respect than a clothes hanger. Titled ‘Girls by Girls in Rag & Bone,’ the brand has forgone the typical advertising strategies in favor of posting   campus-styled flyers throughout downtown New York. Cooler than the classic tear off and more entertaining than any billboard, each flyer invites passers-by to rip off a slip directing them to the Rag & Bone website where they can find more information on the DIY project and learn more about how they can get involved. 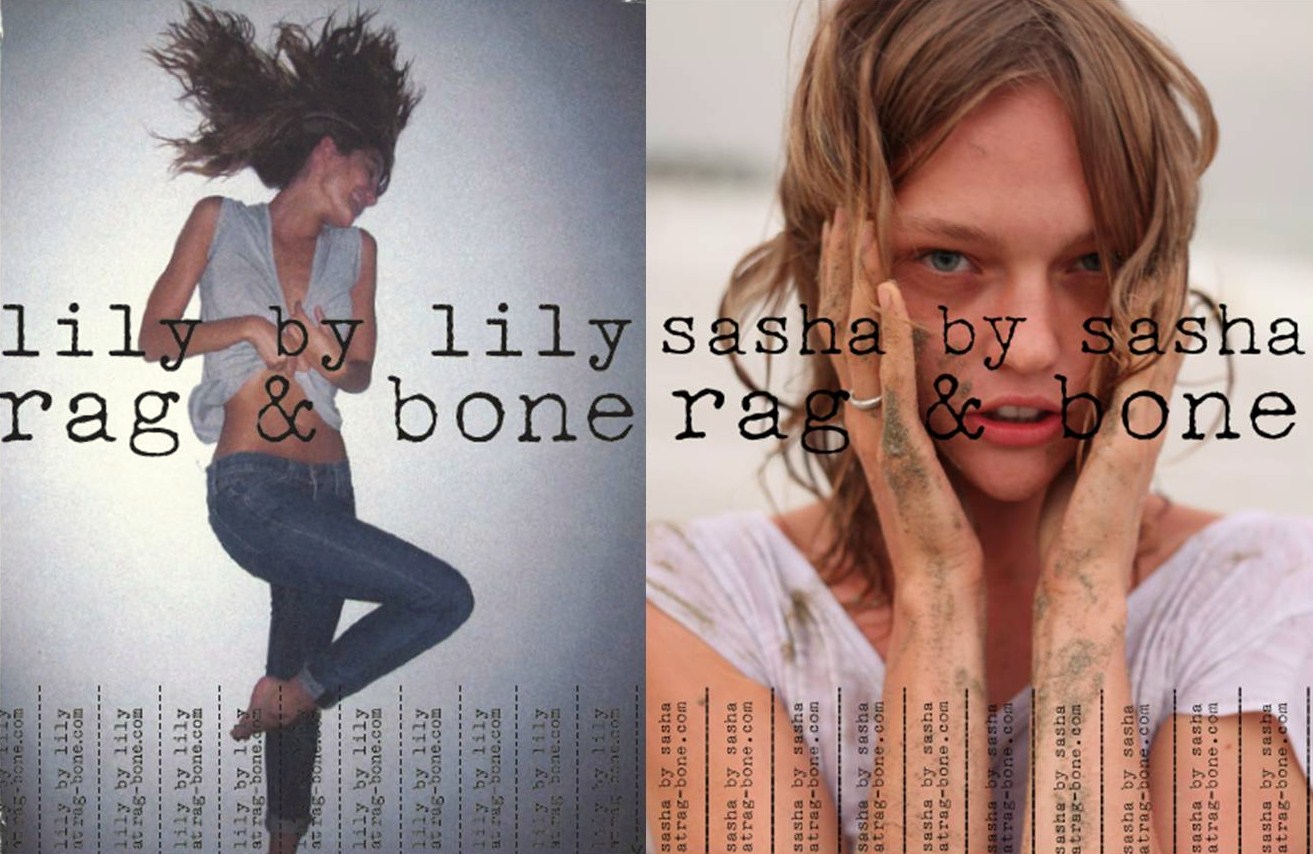 In addition to the 1,000+ flyers spread below 14th street, the brand has  encouraged their supporters to print out their own flyers to post around their hometowns. In addition to the opportunity to sprinkle a little fashion dust in their neighborhood, fans get the chance to attend Rag & Bone’s show during New York Fashion Week by simply submitting a photo of themselves hanging up the flyers. The campaign is available to download and print on their website (http://diy.rag-bone.com).
The e-commerce initiative is slated to inspire girls to post in their cities, or share the images with their followers. Though created for publicity, the motivation behind the campaign was not completely for revenue. “We have always been inspired by the girls who do the show.” Marcus Wainwright recently told the Daily Mail, “Rather than do what every other brand does and have a high-end photographer take very polished shots, we thought, ‘Let’s flip it on it’s head and get the girls to take over.’ We wanted it to be very real.”
Their novel concept worked just as planned. Blogs ate it up. Images of Abbey shaving her legs over the sink, Lily whipping her hair, Edita winking playfully at the camera, and Sasha filling up at the gas station, were meant to “represent the quintessential Rag & Bone girl in a distinct way.” Each girl worked to draw in the idealistic version of Rag & Bone’s target customer, while keeping the “community around the brand” looking forward to the future. By letting New York City and the internet do the work for them, they eliminated the need to drop hundreds of thousands of dollars to get their pieces featured in magazines.  Even a brand whose rising status is as climactic as Rag & Bone needs to watch their cash flow during these tough economic times. After seeing the widespread success of Rag & Bone’s marketing strategy, other brands have adopted similar concepts for their own campaigns. American Apparel and Forever 21 have both used recognizable fashion bloggers in place of models. Forever 21 is going so far as to plaster Rumi Neely of “Fashion Toast” along the sides of New York City buses to promote the opening of their Times Square location. American Apparel conducted an online search for their newest plus-sized models, using the competition as a vehicle for revenue by to asking their followers and friends to vote  directing them to the American Apparel website to do so. Rag & Bone has continued on to a similar strategy for Fall/Winter 2011 entitled Rag & Bone/Jean, which depicts a new crop of models as shot by a loved one. Per usual, each model must be wearing Rag & Bone, in this case jeans and their favorite piece from the fall collection, for an effect that is completely raw. “No stylist, no hair and make-up, no lighting. Just a girl and her camera. And Rag & Bone,” states the website.

Hello my family member! I wish to say that this article is amazing, great
written and include approximately all vital infos. I'd like to look more posts like this .