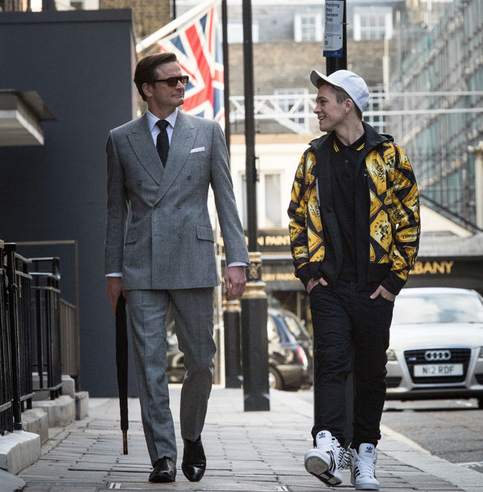 The first time I saw a preview for the film ‘Kingsman: The Secret Service,’ my heart was racing, although it wasn’t the stunts or explosions that had my pulse quickening. While the on-screen exploits undoubtedly look like the makings of an exciting film, my eyes could only focus on one thing: the impeccable tailoring and dapper suiting donned by Colin Firth’s character, Galahad.

The James Bond-esq film takes place in London and centers around (what else?) a group of super spies trying to save the world. Where it really gets interesting however, is the bit about their mission HQ and professional cover up falling under the guise of running a bespoke tailoring shop on the famed Savile Row. Unsurprisingly, many of their gadgets and fancy gizmos stem from their wardrobe and various accouterments that any rakish man would typically have on hand: hand grenades masquerading as lighters and bullet-repelling umbrellas. While not exactly practical for the everyday gentleman, the film stars are sure to inspire a yearning for their on-screen wardrobe among male viewers.

Arienne Phillips, Kingsman’s chief costume designer, known for her Academy Award-nominated work on Walk the Line and Madonna’s W.E., described this phenomenon to The New York Times as “When men identify with a costume they want to own, it’s almost like teenage girls. I actually had someone show up at my front door once, which was disturbing, asking me to make me a costume like Brandon Lee (The Crow) wore.” 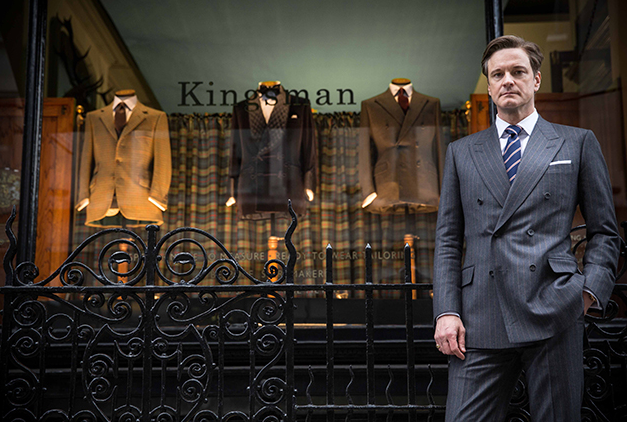 My first assumption was that the costumes must have been pulled from the likes of past Tom Ford and Gucci collections. In truth, the looks were actually created specifically for each character by Phillips and director Matthew Vaughn. Taking it one step further, they created an accompanying collection that mirrored the clothes worn throughout the film for a collaborative effort now available for purchase on Mr. Porter. Perfect for the little boys who never quite grew out of their desire to dress like an action hero.

The 60-piece collection has been available via MrPorter.com since the fall. It features traditional British tailoring paired with pieces from well-known English heritage manufacturers such as Drake’s (ties), Makintosh (over coats), and Turnbull & Asser (shirts). Prices range from $650-$2495 for a wool suit and go up to $21,582 for a rose-gold, croc-embossed Bremont wristwatch. 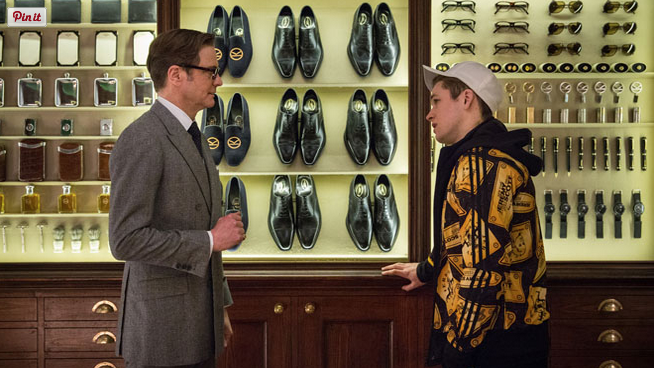 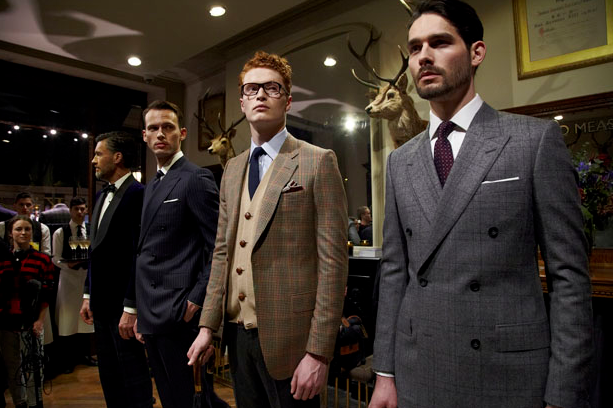 Beyond the obvious appeal of dressing the stars in dashing ensembles, the clothing is tantamount to the plot as it serves as a visual cue for audiences of characters’ transformative processes. Galahad’s objective is to recruit and train new members for the team, and while other representatives’ choices are more conventional selections –well-bred children of the upper class, Galahad’s draftee is in need of a serious attitude adjustment. Gary, played by newcomer Taron Egerton, starts off as the typical drop out. A boy who was once viewed as extremely promising material, was met with unforeseen circumstances and fell into the wrong crowd. He might not see his own potential, but Galahad believes that he can groom (both literally and figuratively) this young man into something great. As he eventually breaks through to him, the audience sees Gary change out his ill-fitting street wear for bespoke suits.

The Kingsman x Mr. Porter collaboration has the potential to do something extraordinary for the link between the fashion and film industries. In the past it hasn’t been unusual for films/directors to collaborate with designers to create one-off collections, but these products are often forgotten soon after their release, cast off as silly and outdated promotions. Kingsman on the other hand is proving itself to be a remarkable exception due to its unparalleled quality and handsome tailoring. While figures haven’t been released, it seems to be selling well and a second collection for Spring ’15 is already in the works. As Galahad says, "The suit is a modern gentleman's armor. And the Kingsman agents are the new knights."

If you wanna follow each other let us know!

Love this post- absolutely dying to see this film, it looks so good :)
http://looklovewear.blogspot.co.uk/2015/01/ootd-brick-lane.html

Sounds like an awesome movie and what great style!

I am so loving all of the suits. And I can't wait to see it when it hits theaters here.

I love watching films for taking in the great costume eye candy, too. Period films are always great, but Baz Luhrmann's are my favorite for the over-the-top decadence.

I love a well dressed man. Lovely suits by the way.
http://sophialastyles.blogspot.co.uk/

How had I not heard about this film? Thank you for sharing! I want to see it!

This is too cool!! I love your blog!!

I am looking forward to watching this movie!

Love that coat!
We followed you on G+ hope you follow back :)

Colin Firth does look exceptionally well in that suit! I've seen a few previews for this and am interested in whether or not it will be any good. I can't quite figure out if I want to see it or not.

I hadn't heard of this film! I'll definitely check it out!

I hadn't heard of this film! I'll definitely check it out!

I have not watched the movie yet but these are amazing suit, love an impeccably dressed man.

I haven't watched this movie but it sounds great! Cool post! =D

The trailer is great, will wait mid february to see it release in Paris :-) Eve xx