How Is Harry Potter Like Fashion? (with thoughts from A$AP Rocky)

In the interest of full disclosure, I should let you know that I am absolute geek in all areas of life when it comes to Harry Potter. I have a horrid tendency to relate every situation back to a quote or a fact from the books whenever the opportunity presents itself (and often in wildly inappropriate settings).

In both Potter and fashion, it seems that A$AP Rocky and I have found a point of shared interest. The ‘Fashion Killa’ rapper was quoted comparing the two entities in a recent interview with Complex magazine. “Your wand chooses you, as opposed to you choosing your wand. That’s what fashion is like, man. You gotta let it take control.”

Moving beyond the initial ridiculousness of this statement, it got me thinking. Maybe there was some validity in his words. After all, both the fashion industry and Potter universe aim to create magic, whether that magic is the literal kind or the kind that can only be achieved by capturing that perfect moment on camera. And certainly, both worlds are seemingly incomprehensible to outsiders (muggles). But moving beyond these obvious comparisons, how else is fashion like Harry Potter? 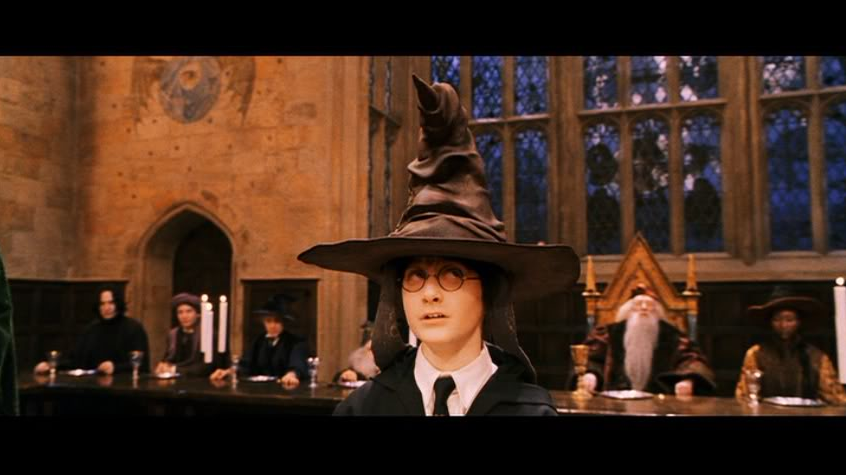 The moment that first years arrive at Hogwarts they are filed into the great hall to take place in a sorting ceremony that will decide on their home for the duration of their schooling. When placed on his or her head, the sorting hat is able to read the mind of each student in order to place them in the house best suited to their individual qualities. There are four houses: Gryffindor, Ravenclaw, Hufflepuff and Slytherin.

While fashion moves at a quick pace and is always striving for the new and modern, there are a number of historic houses that we return to each season. The majority of young/new designers aim to be placed within these institutions to receive proper training before venturing out on their own. Which house they are placed in is based on their personal aesthetic choices and capabilities, much like the sorting process at Hogwarts.

For the bold yet elegant ladies who lunch breed there’s the house of Oscar de la Renta. For the more conceptual types we have Comme Des Garcons (Ravenclaw). For the cool, younger sister who maybe parties a little too hard there’s Alex Wang (Hufflepuff). And for the troublemaking dame with slits up-to-here, there’s of course, the house of Versace (Slytherin).

Taking on the position of the sorting hat are industry luminaries Anna Wintour, Delphine Arnault, and the late Louise Wilson. When the editor and academic put a call into the right people, jobs are created and futures are made. Lazaro Hernandez, of Proenza Schouler, once told the story of how he got his first job after writing a note to Anna Wintour on an airplane napkin and slipping it under her drink. Though Wintour didn’t acknowledge him at the time, Hernandez received an offer from Michael Kors two weeks later saying that Ms. Wintour had passed the note onto him. Alber Elbaz of Lanvin has also been quoted saying that anytime Louise would call him telling him to hire one of her recent graduates, he would do so immediately. 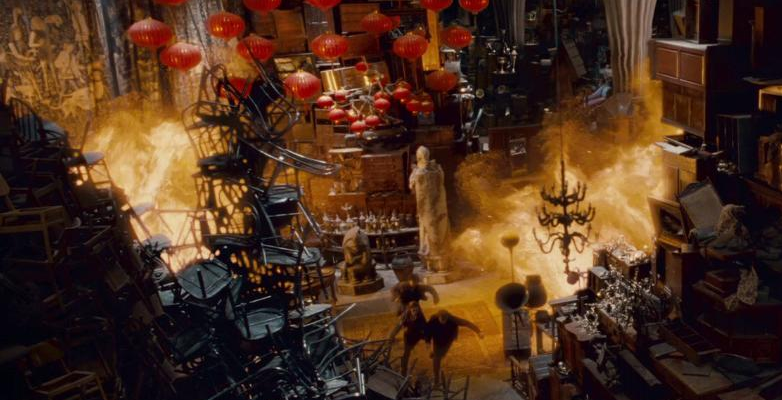 The room of requirement, first introduced to us in The Order of the Phoenix, has an eerily similar function as a fashion closet does during a photo shoot.  Located on the seventh floor of Hogwarts, the room of requirement is described by Dobby as “a room that a person can only enter when they have real need of it. Sometimes it is there, and sometimes it is not, but when it appears, it is always equipped for the seeker's needs"

Well, if you’ve ever worked on a photoshoot you can understand the usefulness of a room like this. How many times does someone on set suddenly decide that life isn’t worth living anymore if we don’t have “that silver cuff from that Marni show three seasons ago”?  Do you expense an urgent messenger to head to the Karla Otto offices stat? No, you can just pop into the room of requirement (options closet)! Hallelujah! The day is saved.

Correct pronunciation is crucial! Harry learned his lesson the first time he used floo powder to apparate in The Sorcerer’s Stone. Instead of going to Diagon Alley, he shouts that he wants to go to “Diagonally” and ends up in the depths of Knockturn Alley instead. Similarly, if you mispronounce the name of a designer or house, prepare to be shunned for the rest of the season. 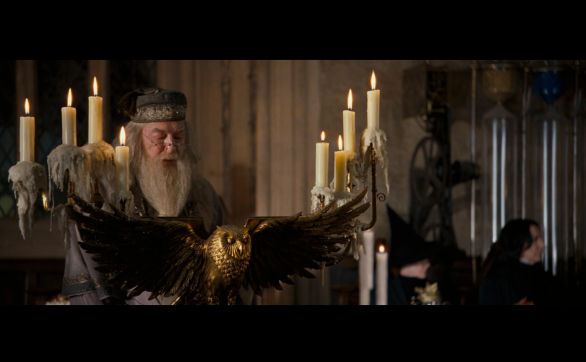 As for the role of Dumbledore, it must be said that there are number of similaries between the Hogwards Head and Karl Lagerfeld. Like Dumbledore, he occupies a magical position in the center of our world where age is rendered meaningless. 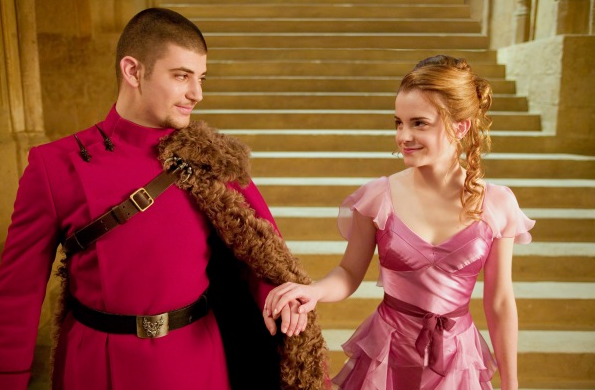 Finally, there is the transcendent role of transformation the fashion plays in Harry Potter.  When Hermione, the bookish and fluffy-haired female lead, descends the stairs at the Yule Ball in a fancy pink gown, she manages to take everyone’s breath away. It’s the first time that we actually get a proper glimpse of how beautiful she has become. We, along with Ron in particular, finally realize that she isn’t just one of the boys but has in fact developed into a lovely – and stylish - young lady. 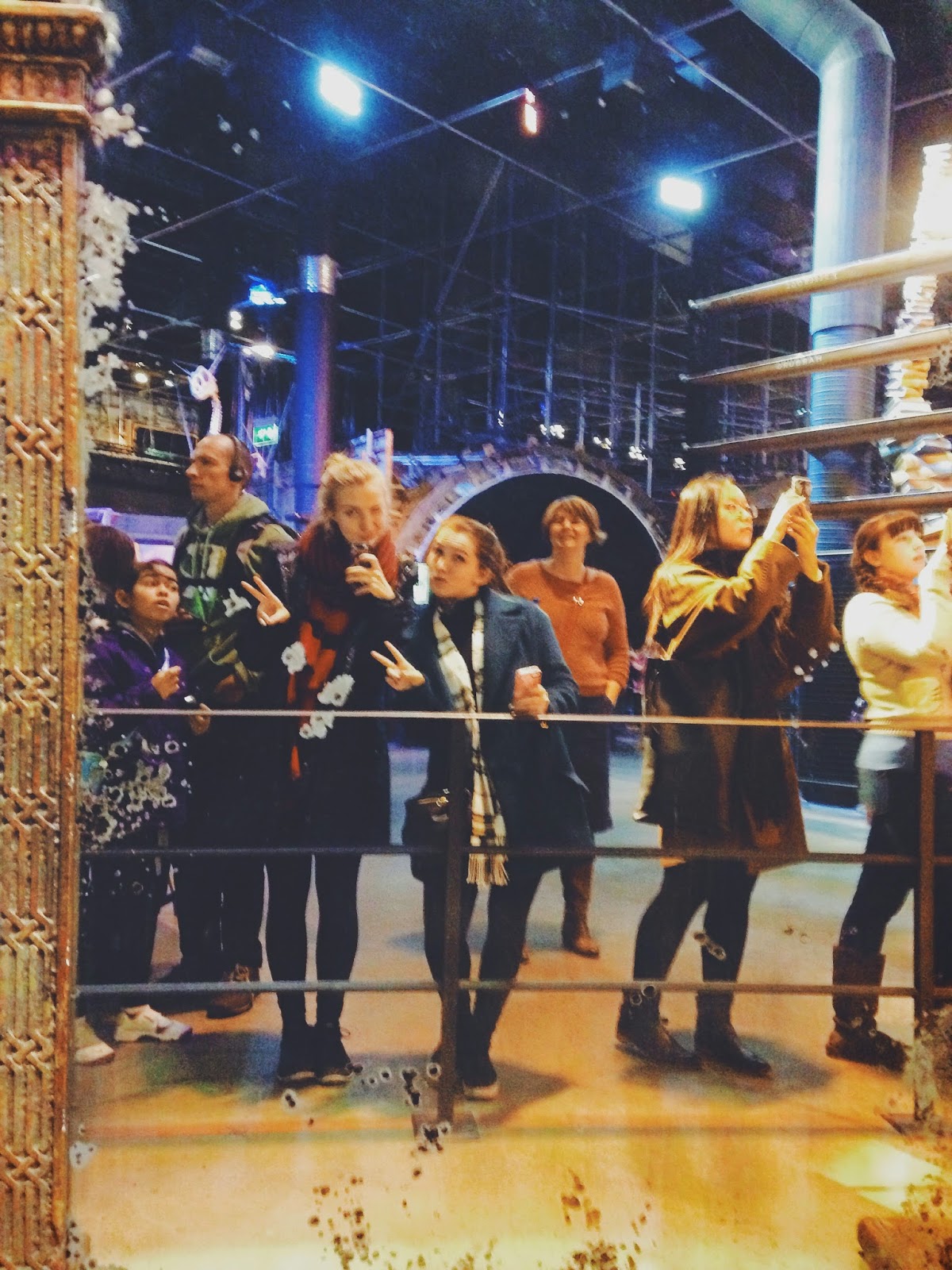 My fellow-Potter nerd friend and I went to the Harry Potter studio tour out on the Warner Brothers Lot in Leavesden. We felt that a selfie in the Mirror of Erised was necessary.

huh, this is such an interesting post! different take. :D

Great post. I have never been a fan of Harry Potter but you have to love the glasses. Thanks for sharing and have an awesome day.

Oh my goodness, I love this! I am a huge Potter Geek myself but I never even considered a link between the fashion world and the Potter universe! I love your bit about there being the houses that everyone wants o be sorted into - such a clever post!

The Equinox Fashion by Paweerata said...

i just used to love harry potter and this post is amazing!

This line is spot on: " For the bold yet elegant ladies who lunch breed there’s the house of Oscar de la Renta." Someday I want to be classified as a bold, yet elegant lady. Love this post! I can't believe you were able to combine Harry Potter and fashion but you did it flawlessly!

Can I just say what a pleasure it is to be able to communicate with someone who loves fashion and Harry Potter with equal fervour. I absolutely loved the post. Brilliant, brilliant comparison. I recently created a look inspired by Hermione's outfit in Goblet of Fire. Do check it out. http://obsessory.com/sets/inspiration-hermione-granger/501

Haha, I love this post.
I am too a Harry Potter geak - in the very best way!