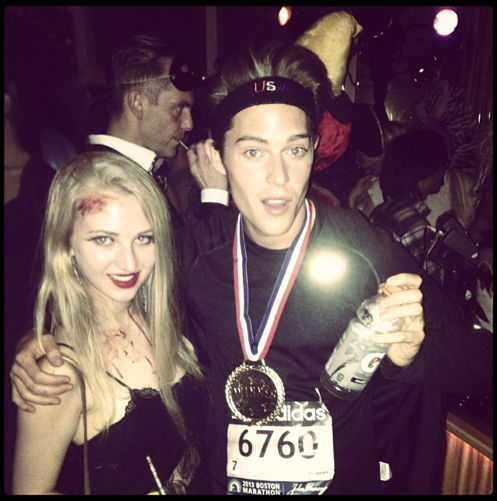 Me and my date for the night, Bruce Jenner (aka Cesar) at the V Magazine Halloween Party

Growing up in New York City has its perks, but I always felt like I was missing out on Halloween as a kid. While the amount of candy you can collect in a single night is unsurpassable in a co-op (so long as you can hog the elevator for that long), classics like spooky hayrides and haunted cornfields just weren’t an option in the city. My ideal Halloween comes straight out of a Goospebumps book: smalltown, big mystery, loads of graveyards- the whole shebang. So when the day finally rolled around this year, I decided to try and find a little Halloween magic without leaving the city (well, Brooklyn.)

Attempting to venture out to Red Hook, I took a couple (try 25) wrong turns and ended up in Cobble Hill. As fate would have it, I ended up finding exactly what I was looking for. The sky was a perfect shade of ominous gray, the streets were lined with brilliant fall foliage, and there were what seemed like endless rows of townhouses decorated to extremes. 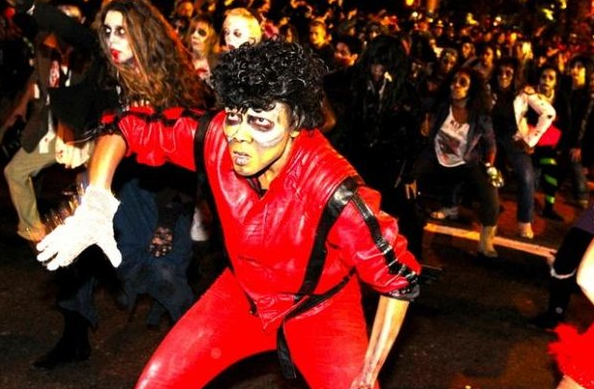 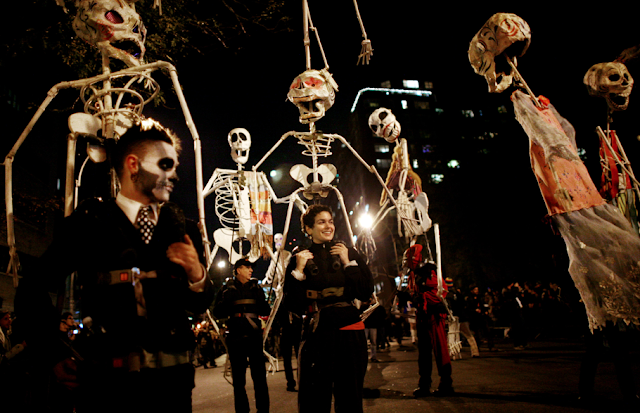 Last year was supposed to be my first year attending the village Halloween parade, but Hurricane Sandy really put a damper on that plan. This year, thanks to their parade’s kickstarter campaign, they were back in full swing. It’s definitely  something to cross off the life bucket list, but the entire scene is essentially a small-scale version of (what I imagine) Times Square on New Years Eve: crowded, pushy, and intoxicated. No bueno. 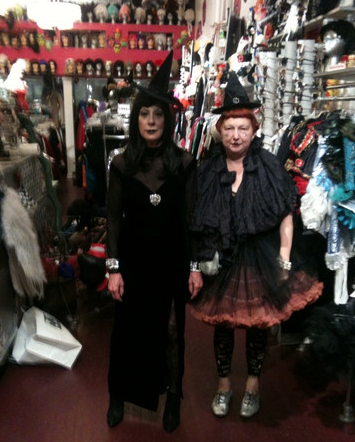 A highlight of the evening was running into one of my favorite ‘fashion people,’ Lynn Yaeger, on her way to the Screaming Mimi’s party (though she felt strongly about staying away from anything related to fashion that night). As usual Lynn was a riot. When I asked if she was going as a witch, she said, “well, I’m wearing the hat but the rest of it is just my normal clothes.” 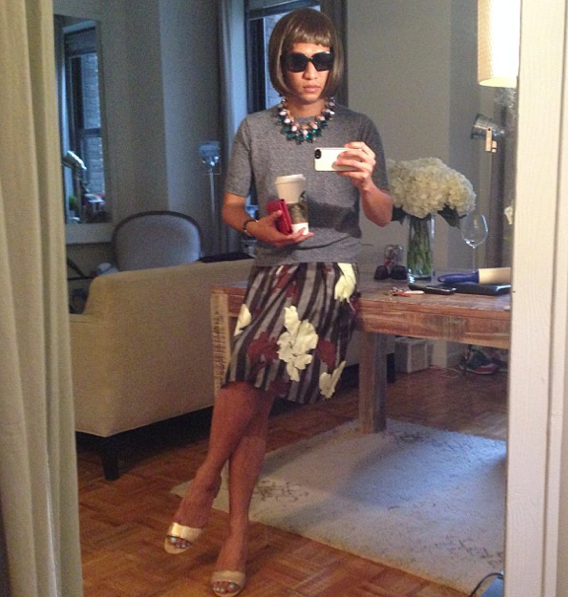 My last stop of the night was the V Magazine Halloween Party at The Boom Boom Room. I went as Carrie (sadly the intensity of the entire look is a bit lost in the first shot, but just imagine a lot more blood) and my lovely date for the evening, Bruce Jenner (aka Cesar Casier). As usual, V always knows how to give us a good time. And as far as best costumes go – BryanBoy dressed as Anna Wintour takes top honors, followed closely by a faceless model dressed as the Kaiser himself, Karl Lagerfeld. Until next year.

Hello dear, here I am. Thanks for visiting my blog, I hope there back.

Crowds of intoxicated people is more scary to me than ghosts!

I'm always wanting something more out of Halloween. I want it to be a fun celebration -- where I get to dress however I want -- but I want to feel free too!

I live in a city as well so finding the pumpkin patches or eerie haunted houses is really hard :(

Maybe I'll be like you and plan something a little more fun for next Halloween!

Your Halloween looked like a lot of fun! I opted for a low-key get together at home and spent the night passing out candy to dozens of little "supermen" and princesses!

Wow, I have to confess this is exactly what I've been looking for in the online world- someone to tell their experience from US, because that's where Halloween was born. Also, having a fashionista to tell her Halloween story, from New York...AMAZING!! I feel like I hit the jackpot today, best blog post I could read!

Have a great weekend,
Mary x

I am loving all of these pictures! It looks like an amazing and fun Halloween. The costumes are amazing.

Sounds like the perfect grown-up Halloween party! We don't celebrate it here so its always fun to see. Great costumes. I am thankful for your kind comment, I find these through books I have bought, emails and a few websites. I post quotes every FRiday. Have an awesome weekend!

Beautifully written post, thank you for sharing! I just became your newest follower :) Hope you can check out my blog and follow back if you want. Lemme know if you want to connect on Facebook and Twitter, I'll follow you back there as well! XOXO

I think that living in NY is really cool and you' re lucky girl :) Love your photos as same as NY!

Hello dear...Thank you very much for visiting my blog and leaving your comment...

Yes, I am from Greece(answering your question).

If you want we can follow each other. Just let me know so that I can follow back.

thank you for sweet comment, dear!
what about following each other?
http://chillychickblog.blogspot.sk

What a party! Very cool impressions :)

Thanks for your nice comment, I bought my skirt from ebay :)

Those are some scary pics. Going as a witch??? wrong question girl...nice post and looks like you had lots of fun. Great way to kick start the bucket list

Nice Halloween pictures, looks like it was a success c:
I thought BryanBoy and nailed his
Anna W. :P Xx

hahaa looks like so much fun!! boom boom room + v mag sounds like a dream. must have been tons of fun

OMG so much fun ! Great party !