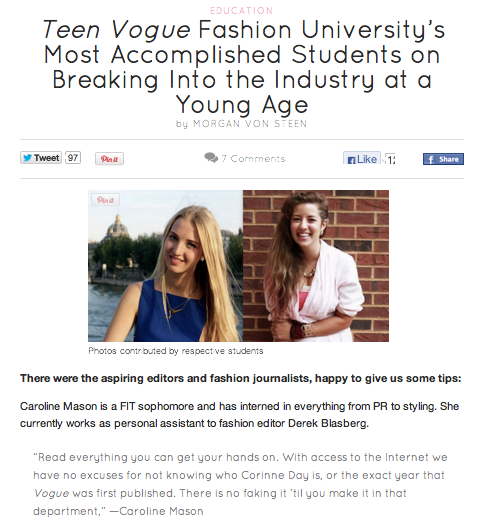 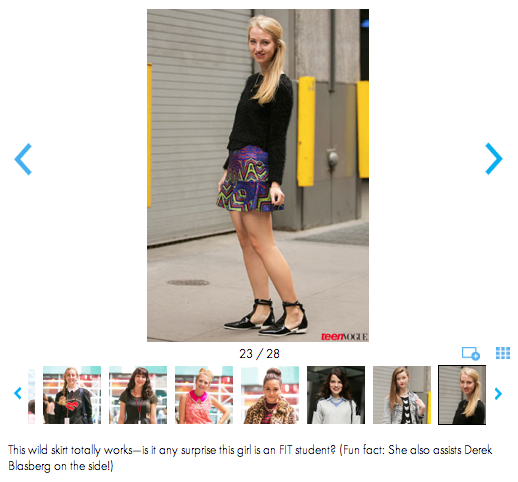 above: my take on tvfu on fashionista.com and my look of day on teen vogue.com
(sweater: topshop; skirt: river island; shoes: zara)

I attended Teen Vogue University on a whim. To be honest, I was a little skeptical about the whole thing. I mean, I would have to be in the same room as a bunch of other teenagers- if high school taught me anything, it’s that I do not have nearly enough patience for people my own age. But my friend Morgan (known by the entire Teen Vogue staff as, “the girl who rapped”) had been so enthusiastic about the whole thing that I figured: it’s one weekend. I can give up reading magazines in bed and going to random movie theaters in Brooklyn for one Saturday on the off chance that I might actually learn something, right?

Fast-forward to right now and I’m glad I didn’t pass up the opportunity. Not only did I meet a few people that are actually promising (not just the ‘ohh, Michael Kors is my favorite designer. I heart Bloomingdales…’ types) but I found myself taking notes and actually being inspired by what the speakers had to say. There was a lot of energy in the Conde Nast conference rooms that day, and while I can’t recreate that atmosphere, I can share a little bit of what I learned at TVFU: 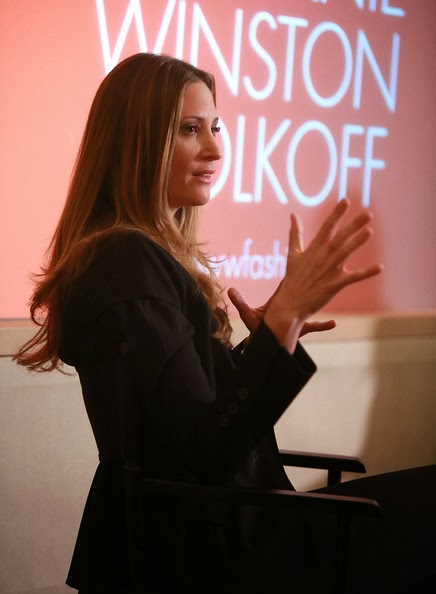 Stephanie Winston Wolkoff’s career in fashion was never supposed to happen. In fact, it wasn’t until she was called into a meeting with Anna Wintour (in case you were wondering, she wore a Ralph Lauren blue and white striped pantsuit to meet her future mentor) that she began to seriously consider a job in this industry.

After playing D1 basketball (SWW towers over most people in flats at a sturdy 6’1) at her alma mater, Fordham University, she began her career in the art field at Sotheby’s where she worked as a receptionist. While I’m sure her connections to the Winston name didn’t hurt, she's not one to use her family name gratuitously. She told stories of staying after hours to help the marketing department, advising students to “show passion for what you do but always keep your eyes open.”

Intern Lingo: If you work in a particular department, make sure to keep that your first priority. But if you’ve done your duty and see something else that could be done, be that extra hand even if it doesn’t fall directly into your job description.

After meeting Anna, whom she credits as “her mentor,” she began working at Vogue where brand new position for was created for her. It was there that she developed her “unbelievable ability to think beyond the immediate,” and built connections which she has continued to cultivate throughout her career. As if that wasn’t impressive enough, she has since started her own company, SWW Creative, functioning as a connector in the industry and focusing on special events such as the Met Gala and Mercedes Benz Fashion Week. Laughingly she refers to herself as the “Switzerland between Conde Nast and Hearst.” A normal day sees her in contact with “upwards of 20 people a day.”

Some of her best advice came on the subject of going out at night, or rather, forging a nightlife in the interest of keeping a balanced lifestyle. As any New Yorker can attest to, there is a constant pressure to go out at night if for no other reason than fear of missing out (FOMO was officially inducted into the dictionary this year, after all). But SWW made it quite clear that though “relationships are the biggest part of my job, [I] didn’t get that by going out at night... It’s about going to the right events, not all of them.” 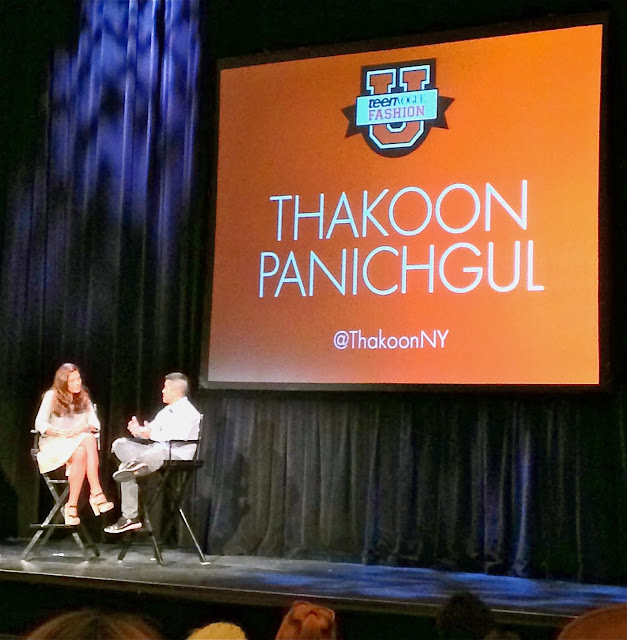 The second lecture of the day was for the DITs (designers-in-training):  Thakoon Pitchugal. I used to intern under the Thakoon brand at Karla Otto PR the summer after my junior year of high school where Thakoon was a former client before taking all operations in house, so I was particularly interested in hearing what he had to say.

Like Winston Wolkoff, Thakoon’s career path began as something else entirely (though his, at least, began in the greater realm of fashion) as an editor at Harper’s Bazaar. Though he claims to have loved his job, he found himself much more intrigued by the work of the designers he was interviewing than his own. He wound up in the same tough position of many of the TVFU attendees on the cusp of going it alone.

Pre-Bazaar he attended Boston University’s Business School on a full scholarship to please his parents. He then continued on to do two years at Parsons before starting at J.Crew as a merchandiser (they liked his business background) before landing at Bazaar.

Eventually he found the will to start his own line consisting of an unreal four pieces which he then brought on appointments with four major department stores: Kirna Zabete (they said yes - though they were already friends of his), Ikram (yes), Net-a-Porter (yes), and Barney’s (no… but only because he didn’t have enough pieces to stock at the time.)

He highlighted having “access to a place like New York” as a source of inspiration, particularly for the “access to luxury” that it provides. He also stressed the importance of being seen, not heard when starting out.

With young girls like Cara and Karlie as role models for making it big by implementing their personality into their work and media outlets, interns have started believing that sharing their opinion (or often sharing, period) will individualize them in a positive way.

Not so, says Thakoon. “In fashion, people often get personalities that are bigger than they are. In this generation everyone has a voice, but how are you differentiating yours?” His ideal intern is one who: “Sits. Listens. Absorbs. No words. That’s where I see potential." 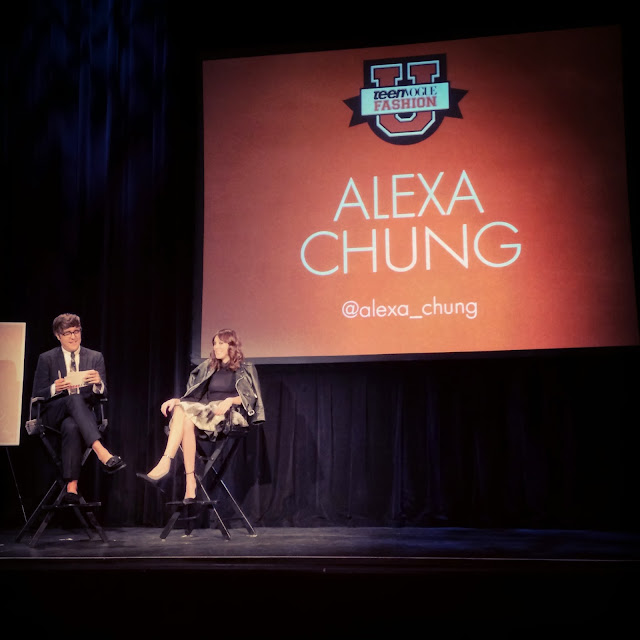 Everyone was excited for the British it-girl, Alexa Chung, to take the stage. Though as for the topics she would actually be discussing, there was no definitive answer. Would she be talking about her modeling days? Is she going to spend the whole time trying to convince us to buy her book (It  - out now)? Or was she just going to drone on about her personal style?

While she definitely touched on each of those topics, the majority of her talk was structured a lot like girl talk with a friend. In fact, when I rose my hand to ask a question, rather than actually answer it, we started discussing the care instructions of my fuzzy black Topshop sweater, which she also owned. “Do you wash yours? Mine has acquired a weird smell!” Just a few of the groundbreaking subjects up for debate. 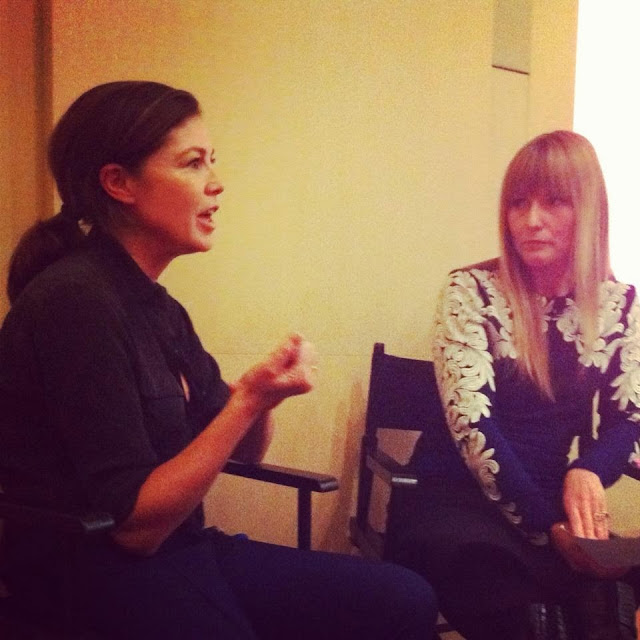 From Vogue UK to Topshop to… both. Does occupying two of the most coveted positions in the fashion industry make Kate Phelan the most successful Central Saint Martins dropout of all time? (Phelan abandoned her courses when Vogue offered her a full-time assistant position with then-Fashion-Editor, Sarajane Hoare) I’d say so.

Topics of discussion centered around her work as Creative Director at Topshop and, specifically, what role she plays in keeping Topshop at the top of the game (sorry, I had to) A process she calls “How to Topshop Topshop.”

She is the company’s first creative director (yes, another job that was specially created because a company liked that person so much- are you taking notes?) What it is vs. what it isn’t may be a bit hazy, but what it focuses on is clear: social media.“Social media is everything,” Phelan stated. “Communication is how we grow [as a brand].”

She went on to stress that though traditional advertising is still relevant, it’s no longer the be-all, end-all that it once was. “We can advertise to our heart’s content, but we don’t know if we are reaching the heart and soul [of the customer].” Social media allows Topshop to share their story directly with customers. 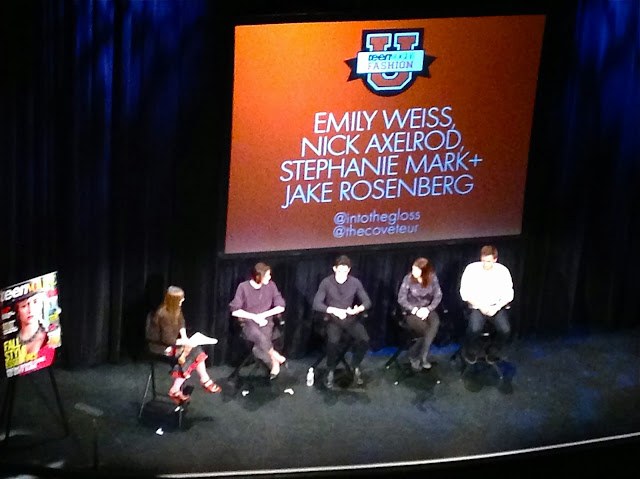 The fact that the keynote speaker was a Blogger Panel rather than an editor or a designer speaks volumes about where the industry it heading (Anna Wintour was the keynote speaker just a few years ago.) The teams behind two of the most visited sites online took the stage to answer questions from an audience of 500 students: Emily Weiss (of ‘super intern’ fame) and Nick Axelrod (formerly of Elle Magazine) of Into The Gloss, and Stephanie Mark (a Parsons grad) and Jake Rosenberg (OMG! A straight man in fashion?!?!) of The Coveteur. 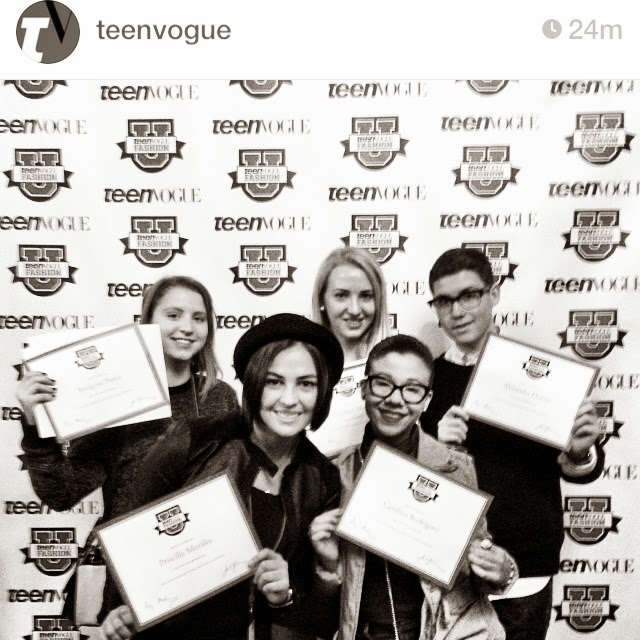 Reppin' the grads on the the teen vogue insta!