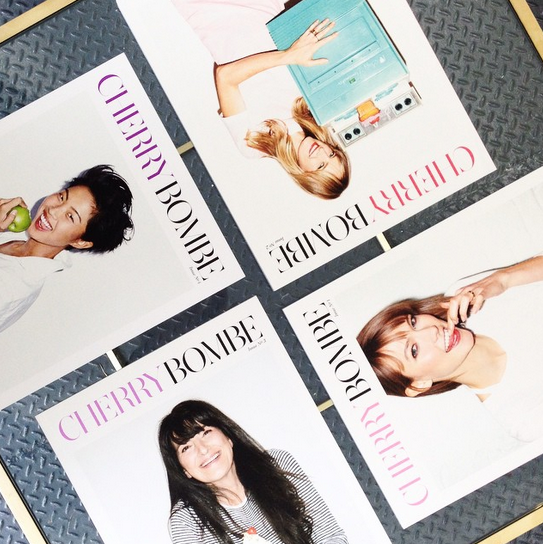 This past summer I had the pleasure of becoming part of the team behind Cherry Bombe, a terrific new magazine that celebrates women and food.  The first time I came across the magazine I was at the McNally Jackson bookstore in SoHo and noticed that Karlie Kloss was on the cover.

Of course, a magazine with Karlie on the cover is nothing new… I’m sure there were at least three others there featuring Ms. Kloss in various positions of flexing her abs and giving good cheek. But what was especially unique about this cover was that Karlie, decked out in an apron and splattered with cookie batter, looked genuinely joyous.  Upon purchasing the magazine and actually reading through it, that feeling of optimism seemed to prevail throughout the issue. While the topics discussed were just as serious as the kinds of stories appearing in other trade publication, you couldn’t help but feel happy as you paged through. The design is beautiful and entirely aesthetically appealing – unlike other periodicals, they’re not afraid of white space and know how to use it to their advantage. This, I now know, is thanks to Claudia Wu (one half of the editing team) who designs each issue herself.

As cheesy at it sounds, when I like something this much, I have to go after it. So after meeting with two of the most inspiring and empowered women I’ve ever had the pleasure of working with, Kerry Diamond, the editorial director, and Claudia, I was actually able to become a part of putting the next issue together.

One of the highlights of my time there was interviewing and writing a piece on bag designer Pamela Barsky, who has made a name for herself creating bags featuring hilarious (and mostly true) witticisms such as ‘I’m sorry, I didn’t hear what you said I was busy talking about myself.’ (See the full article below.) It was such an honor to work with everyone who contributed and became a part of team Cherry Bombe over the summer and I can’t wait to see how it grows and develops over the next few years. 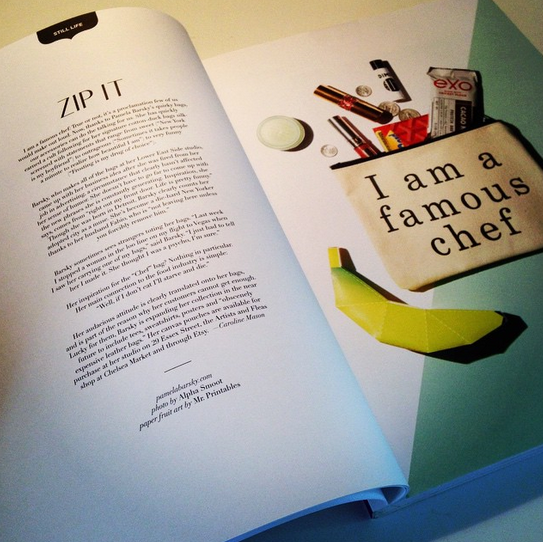 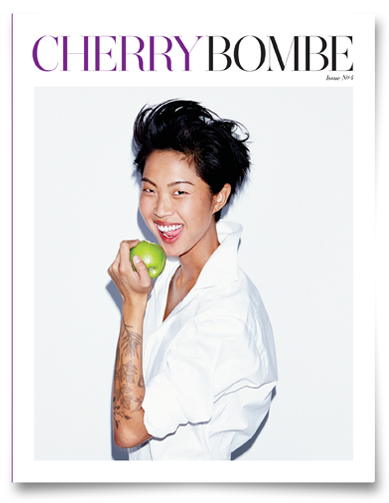 I am a famous chef: True or not, it’s a proclamation few of us would make out loud. Now, thanks to Pamela Barsky’s quirky bags, our accessories do can the talking for us. She has quickly earned a cult following for her signature cotton-duck bags silkscreened with statements that range from sweet (“New York is my boyfriend”) to outrageous (“Sometimes it takes people a minute to realize how beautiful I am”) to drop-dead funny (“In case of emergency, put mascara on yourself before helping others“).

Barsky, who makes all of the bags at her Lower East Side studio, came up with her business idea after she was fired from her job in advertising, a circumstance that clearly hasn’t affected her sense of humor. She doesn’t have to go far to come up with the new phrases she is constantly generating. Inspiration, she says, comes from “right out my front door. Life is pretty funny.” Though she was born in Detroit, Barsky clearly counts her adopted city as a muse. She’s become a die-hard New Yorker thanks to her husband Fabio, who is “not leaving here unless you forcibly remove him.”

Barsky sometimes sees strangers toting her bags. “Last week I stopped a woman in the loo line on my flight to Vegas when I saw her carrying one of my bags,” said Barsky. “I just had to tell her I made it. She thought I was a psycho, I'm sure.”

Her inspiration for the “Chef” bag? Nothing in particular. Her main connection to the food industry is simple: “Well, if I don't eat I'll starve and die.”

Her audacious attitude is clearly translated onto her bags, and part of the reason why her customers can not get enough. Lucky for them, Barsky is expanding her collection in the near future to include tees, sweatshirts, posters and “obscenely expensive leather bags.” Her canvas pouches are available for purchase at her studio on 29 Essex Street; the Artists and Fleas shop in the Chelsea Market, and through Etsy. --Caroline Mason

I think this is an amazing job, the magazine looks great (the cover is really great) and the name too - Cherry Bombe! I liked the bags you mentioned, they really make people think (mmm... the ones only talking about themselves, I don't know) and they are fun. I wish a lot of success!
DenisesPlanet.com

Intresting, i would read it

Hi dear! You have a fantastic blog, so I'd love to follow each other but you don't have the gfc botton... I don't know how! haha
Have a nice week,
xoxo
http://stylishpatterns.blogspot.com.es/

Hi Darling!
u have so nice blog!
yhank u for visiting my
and i started following u blogovin #846 and i hope u follow me back!
kisses
isidora
http://highheelpoodl.blogspot.com