what the stars of valentines day should wear to the premiere 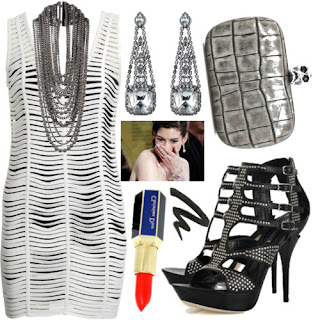 This is kind of the in between for her, she is usually either dressed to the 9s in ball-gowns or couture or shes walking around in Jeans and a tee shirt. This works because its trendy, chic, and still appropriot for a premiere. Alexander Wang dress, Pucci heels, Alexander McQueen clutch
Emma Roberts: 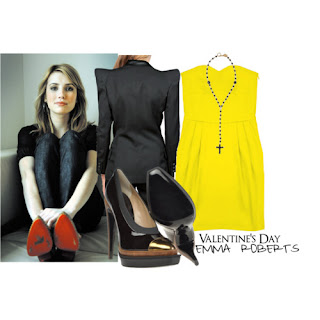 She is kind of the opposite of Anne because her style tends to be more generic Los Angeles teenager. But I think she could really pull off a high fashion look. Especially this one, she has the perfect frame for the bold shoulders not to completely overwealm her and the bright yellow dress keeps the whole look young. Balmain jacket, Fred Flare dress, Proenza heels.
Taylor Swift:

This because I dont think she has ever worn a Herve Ledger and all 20 year old should get to wear a Herve Ledger at least once. I wish the jewelry was silver because it would match better. pretend all the gold here is silver. I just had to have her wearing those Miu Miu flats because they are just so amazing and she is one of the few entertainers who are tall enough to pull off flats on the red carpet. That Chanel bag is so chic but it tones down the outfit a bit and makes it more street style glam which is what I was going for here. Herve Ledger dress, Chanel bag, Miu Miu flats, Valentino earring.
Jessica Alba:

This is kind of the same style she usually wear because I love her style. Its adorable just like her, I wouldn't change it. This is just a little more fashoion-y than hollywood-y. Givenchy heels, House of Harlow ring, Alexander McQueen leather bracelet, camilla and marc dress (i added the shoulder pads).