Models: The Classics, The Newcomers, and The Rising Stars.

Claudia Schiffer:
born: in Rheinberg, Germany on August 25, 1970
discovered: at a nightclub
agencies: with One Management
friends/family: married to Matthew Vaughn since 2002 and has two children (caspar and clementine)
quote: "I've never done any nudity, but I'd do anything if the role called for it."
fact: One of the world's top fashion models of all time who is now crossing over into acting. Kate Moss: (katerine moss)
born: addiscombe, croydon, england on january 16, 1974
discovered: in an airport
agencies: IMG, Storm, d'management, Marilyn
family/friends: one daughter named Lila Grace in 2002
measurements: 33 - 23 - 35" 5'7 105 lbs.
quote: "I'm not a fashion designer. I've never been to school or been trained. I can't draw a dress, really. I just know what I like."
fact: While Moss was in rehab, McQueen projected a 3D image image of her walking down his runway. She also has a success full clothing line at Topshop.

Heidi Klum: (heidi samuel)
born: west germany on june 1, 1973
discovered: in a modeling competition in 1992
agencies: IMG
family/friends: married Seal since 2005 before she was married to hairstylist Ric Pipino
measurements: 35 - 24 - 34" 5'9 120lbs.
quote: "I like to dream, but I like to make things happen."
fact: Most famous Victoria's Secret model as well as host/judge of Lifetime's Project Runway.

Iman: (iman abdulmajd)
born: mogadishu, samalia on July 25, 1955
discovered: by photographer spencer haywood
agencies: One Management, Tess
family/friends: married David Bowie (since 1992); 2 kids (alexandrer in 2000, Zulekna in 1978)
measurements: 34 - 28 - 38" 5'8.5
quote: "When I was in high school there were something like 4,000 or 5,000 students and 50 girls - and i didn't have a date to prom. My Dad had to pay my cousin to take me."
fact: lots of people think she is related to chanel iman but no. Chanel Iman was named after her. Iman was named the 2010 fashion icon by the CFDA, she is the first black woman to do so. She is known as one of the 'good girls' of the industry and although she is mostly retired, she does a lot of charity work on the side. Gisele Bundchen:
born: tres de maio, brazil july 20, 1980
discovered: in a mall in 1994
agencies: IMG
family/friends: married to athlete Tom Brady since 2009. She dated Leonadro Dicaprio for 5 years.
measurements: 36 - 24 - 35" 5'10 127lbs.
quote: "I'm a workaholic, I've been doing my job for a long time."
fact: she has a twin sister named Patricia who is Gisele's manager. She is the world's highest paid supermodel. She acted in The Devil Wears Prada. Devon Akoi:
born: new york, new york on august 10, 1983
discovered: she met kate moss in 1996 and signed with storm in 1997.
agencies: one management, d'management
measurements: 33 - 23 - 33 5'5 120 lbs
quote: "it's difficult to see yourself up on that screen without being a critic."
fact: devon is half-japanese, half-american. her father is the founder and owner of the Benihana chain. she lived in london for a while. she replaced naomi campbell as the face of versace in 1998.

Erin Wasson:
born: irving, texas on january 20, 1982
discovered: when she won the kim dawson modeling search
agencies: IMG
measurements: 32 - 24 - 34
quote: "I just believe, as totally hippie bullshit as it sounds, anything is possible if your willing to grab it and make it your own. Look at Stevie Nicks... she was the poster child for 'I don't give a fuck, it's about my soul and my spirit and my music, and you either dig it or you don't.' And that's kind of my take on all of this..."
fact: She is a self-proclaimed hippie-type. She was the designer at RVCA for a while but just recently left the company. She is staring in the S/S 2010 H&M ads right now. 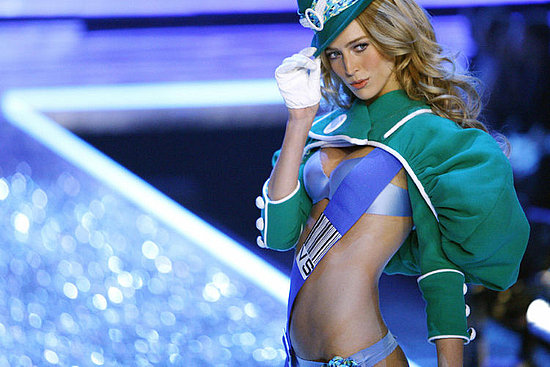 Charlene Almarvez:
born: philippines on january 255, 1994
discovered: became the first runner up in the ford supermodel of the lord contest
agencies: elite, ford
measurements: 31 - 22 - 34" 5'10.5
quote: none, she is a newcomer but sure to be a rising star soon enough.
fact: her nickname is 'chat'. she has a very versatile look, good for evening wear, sports wear... even a bit edgy. Sharon Kavjian:
born: virginia in 1992
discovered: on a senior class trip to washington d.c.
agencies: IMG
measurements: 32.5 - 24 - 35" 5'10
quote: none
fact: she is a newcomer with a hippie-ish look. she opened the rochas show october 2009, she closed blugirl bluemarine February 2010 and stars in the United Colors of Benneton ads. 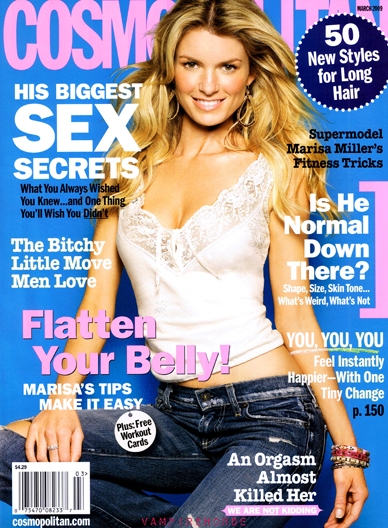 Marisa Miller: (marisa bertetta)
born: santa cruz, california on august 6, 1978
discovered: by two italian scouts in a cafe in san francisco
agencies: elite
family/friends: married jim miller (2000-2002) and then Griffin Guess (since 2006)
measurements: 34 - 23 - 35" 5'8
quote: "I can pick up any sport pretty quickly. Believe me, I know how to throw a football."
"I get a kick out of it... its modeling, its not like I'm finding a cure for cancer."
fact: she is the gorgeous girl in the michael stars ad. She has covered Sports Illistrated multiple times and is a VS model. Natalia Vodianova:
born: nizhny, norgord, russia on february 28, 1982
discovered: she moved to paris to sign with an agency and pursue modeling.
agencies: DNA, viva, why not
family/friends: married to justin portman with three children ( lucas - 2001; neva - 2006; viktor - 2007)
measurements: 34.5 - 24.5 - 35" 5'9 110 lbs
quote: "In two weeks after giving birth to Lucas, I was on the catwalk."
fact: Natalia became the face of 'Gucci Envy' in the very begining of her career. Her husband justin is heir to a very large real-estate fortune in england. Natalia has covered VOGUE many times and has a handicapped half-sister. 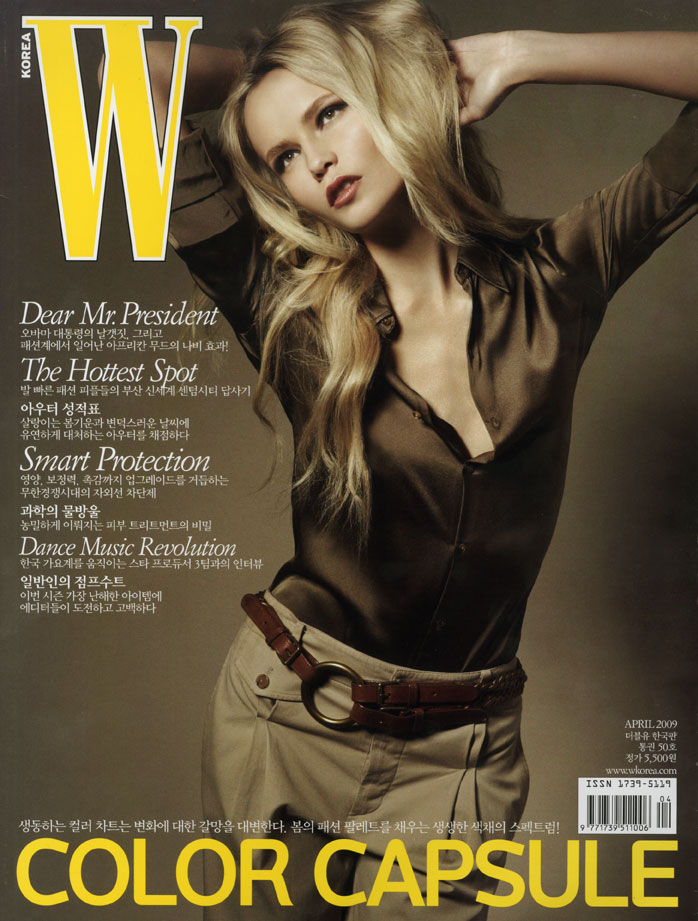 Natasha Poly: (natasha polevshcikova)
born: perm, russia on july 12, 1985
discovered: she entered a modeling contest in moscow. she started in 2003 walking only for Emanuel Ungaro but by the start of 2004 she was on 54 different runways.
agencies: select, women
measurements: 33 - 23 - 34" 5'10
quote: “I hate it when they say that models are like mannequins, and not the people in the flesh.”
fact: she has insane cheekbones and in 2009 she was ranked at #3 on the list of the top 50 working models.

Shalom Harlow:
born: oshawa, ontario, canada on december 5, 1973
discovered: at a cure concert in toronto in 1989
agencies: IMG
measurements: 34 - 23 - 34" 5'11
quote: "You don't learn style from watching people on a runway. Fashion happens every morning when you wake up."
fact: her name means peace. she does lots of charity work creating awareness for going green. She has covered more than a few VOGUEs, known for her elegance and posure in and out of pictures. Abbey Lee Kershaw:
born: melbourne, australia on june 12, 1987
discovered: wins girlfriend covergirl model search in australia
agencies: NEXT
measurements: 32-24-35" 5'11
quote: "I see my body as a blank canvas thats aching to be decorated; I find it all very fascinating."
fact: Abbey Lee fainted at the Alexander McQueen show. She has covered many magazines and been the face of many collections and designers. Does a lot of nude shots and other controversial ones. Her face has been described as an 'alien baby face'.

Adriana Lima:
born: salvador, bahia, brazil on june 12, 1981
discovered: she won second place in the FORD supermodel of the world contest.
family and friends: she is married to marko jaric with whom she has one girl named Valentina.
agency: marilyn
measurements: 34 - 23 - 33" 5'10
quote: "be sure what you want and be sure about yourself. Fashion is not just beauty, its about good attitude. You have to believe in yourself and be strong."
facts: one of the most famous Victoria Secret models, she lives in New York City and just had her first child and has already lost the weight. Agyness Deyn: (lara hollins)
born: little borough, england on february 16, 1983
discovered: wins face of rossendale modeling competition
agency: viva, why not, women
family and friends: best friend of designer henry holland
measurements: 32 - 23 - 34" 5'9 (but she claims to be 5'10)
quote: "You know, even though I'm in fashion, I don't, like, do fashion. Fashion isn't me, even though I work in it. It's just materialistic stuff. I just want to do whatever makes me happy... like being totally conscious. Laughing, is like, my favorite thing to do. Being with friends, having fun... being a bit daft."
fact: Agyness is a big party girl, she likes to date musicians, she lives in downtown manhattan, and has a pug she brings with her everywhere. Her style is very uniquely punk rock chic. 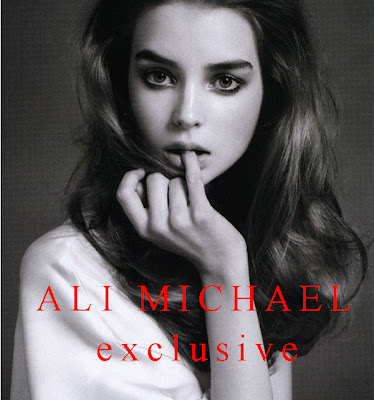 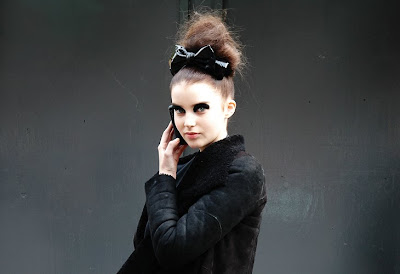 Ali Michael: (alexandra michael)
born: colleyville, texas on may 15, 1990
discovered: wins fashion dallas/kim model search contest
agencies: DNA, viva, why not
measurements: 33 - 23 - 34" 5'9
quote: "The whole industry is full of really creative people, so it makes it a lot easier to be surrounded by people with that creative energy."
fact: She has been dating the same boy since 2004, she is a self proclaimed nerd who was sent home from Paris fashion week because her legs were 'too plump'. She came down with an eating disorder and weighed 106lbs. Now she speaks openly her weight issues and tries to help other girls like her in the industry. 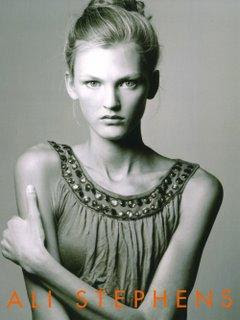 Ali Stephens:
born: salt lake city, utah on may 10, 1991
discovered: while shopping with her family in salt lake city
agencies: elite, marilyn, why not
measurements: 32 - 24 - 35 5'11
quote: "I do what shows I can, but I don't pressure myself to fit into any sample sizes."
fact: when she first started doing runway, she started as an exclusive for Prada in september 2007. She is best friends with Karlie Kloss.

Nice fill someone in on and this post helped me alot in my college assignement. Gratefulness you for your information.

[url=http://hairtyson.com]phentermine 375[/url] are tablets that forbear abridge league weight. One of these tabs has to be taken with water, round 20 minutes ahead of a collation, twice a day.

[url=http://www.payloansonline.com]payday advance[/url]
This is the best way to get all your health products online like green coffee, african mango, phen375 and others. Visit now