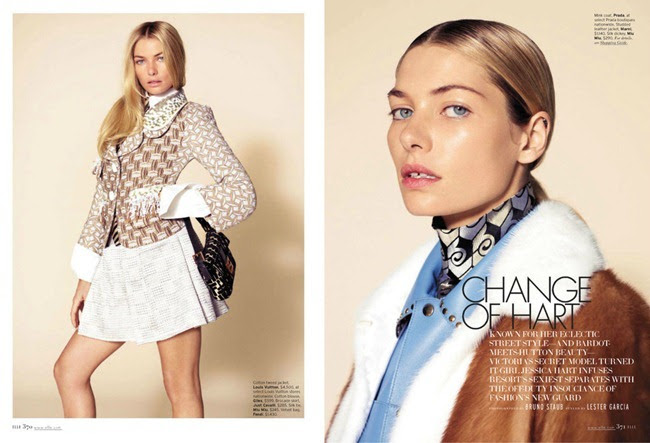 Unfortunately, I've spent the majority of the past week in bed with a terrible cold (complete with all of the glamourous symptoms: pink eyes, a runny nose, and a room-shaking howl of a cough). While I've been able to keep myself occupied with countless mugs full of chai tea, more sleep than I ever thought I could cram into a 72-hour time period, back issues of Nylon, and watching One Direction's new music video "Live While We're Young," to my hearts content (Louis has a solo!!!), my prospects have been a bit dismal lately. However, the one thing that made my week a little bit brighter (excluding my obvious elation over seeing Harry Styles in a wet T-shirt, natch) is that I got my October issue of Elle in the mail which features one of the stories I worked on over the summer.

Shot at my favorite photo studios, Pier 59 (walking distance to my dorm, best natural lighting, unlimited free lattes...) the story focuses on gap-toothed, model of the moment, "Jess" Hart. Encompassing a true downtown, cool-girl attitude, Jess' bubbly personality and fun Australian accent made for the perfect backdrop to some of the seasons' best pieces in what I would say was a nod to their '90s heyday. It's always fun to be on set and watch the beginnings of what you just know will become an amazing image (or watch it do so on the photographers lighting-speed monitor screen) a few months later, but it's even more rewarding to see it in tangible form.

I think there is something to be said about each image, but in terms of my favorite I'd have to say it's a toss up between the one with the Missoni jeans and the one with the Versus dress. It was such an experience to watch Jess just completely transform into a something else in front of the camera, much like watching some of my more theatrical friends getting ready to go on stage. I think her Jackie O side came out magnificently when you gave her a pair of concealingly large frames and a floppy hat. However, I can't stop thinking about how well the lines of the Versus look photographed- it really draws the eye up and down, plus the addition of the pink bag was simply genius. With anything else it would have just looked over the top, yet when paired with the hard lines and daring cutouts of the Versus, it was just right. 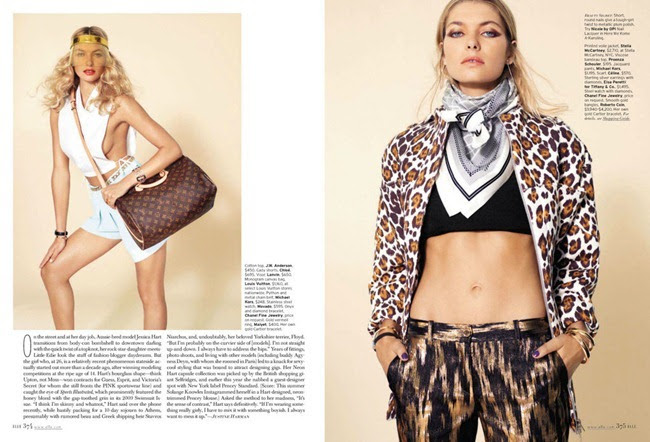 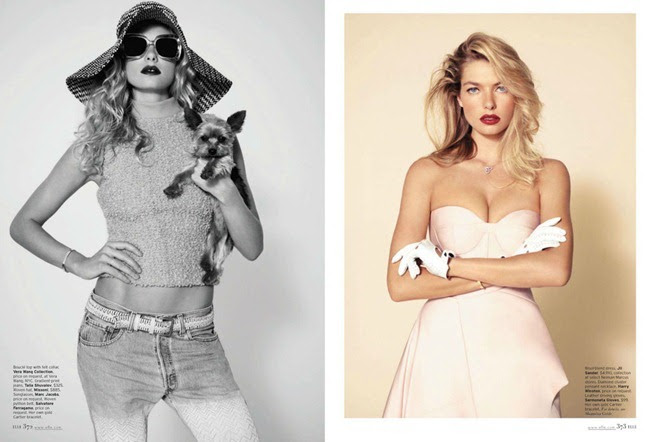 You would think that when a girl as commandingly gorgeous as Jess is around, all eyes would be on her. But the real star of the show was Floyd, Jess' adorable yorkie. She was the HBIC (head bitch in charge) and she knew it. She even had her own monogramed Goyard bag! I don't even have that.

Not only was this dog aww-induicingly sweet, but he had good taste- sniffing around the Celine and Ferragamo heels while completely ignoring the questionable Kanye West contraptions. Definite V.I.P. status. (Very. Important. Puppy) 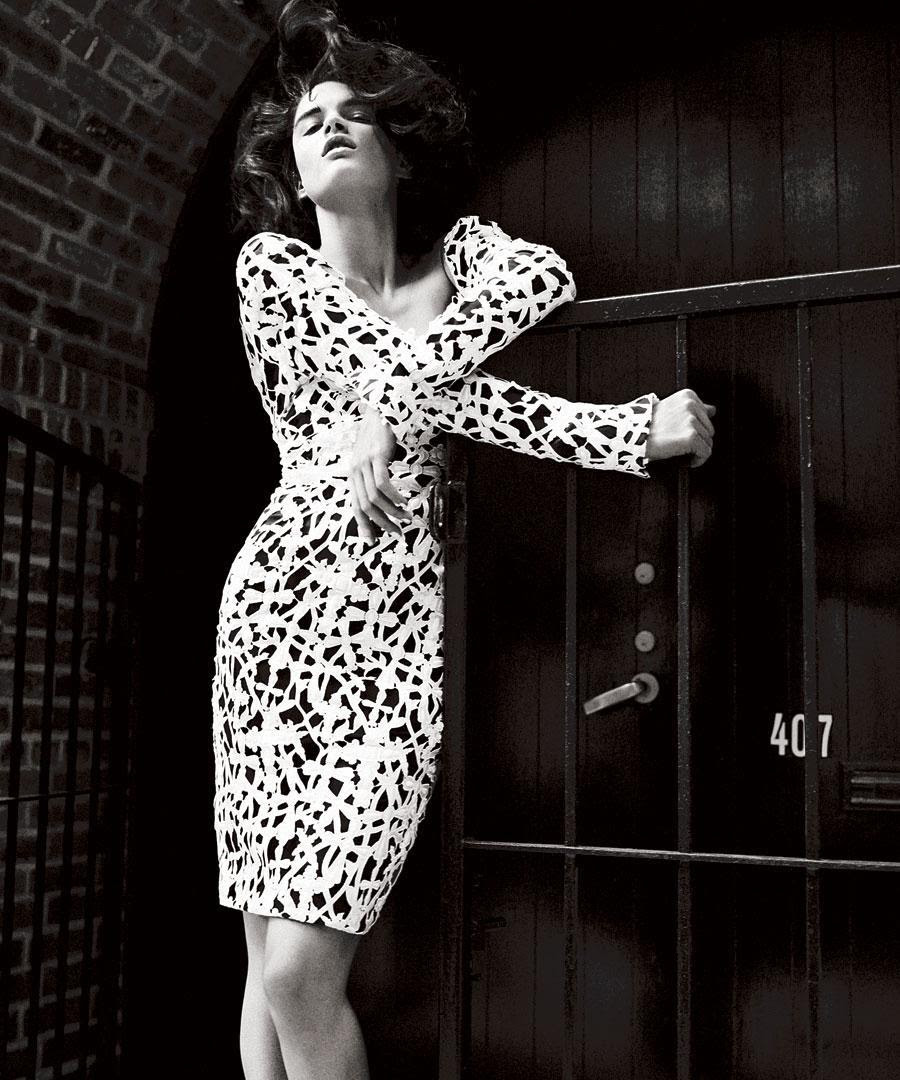 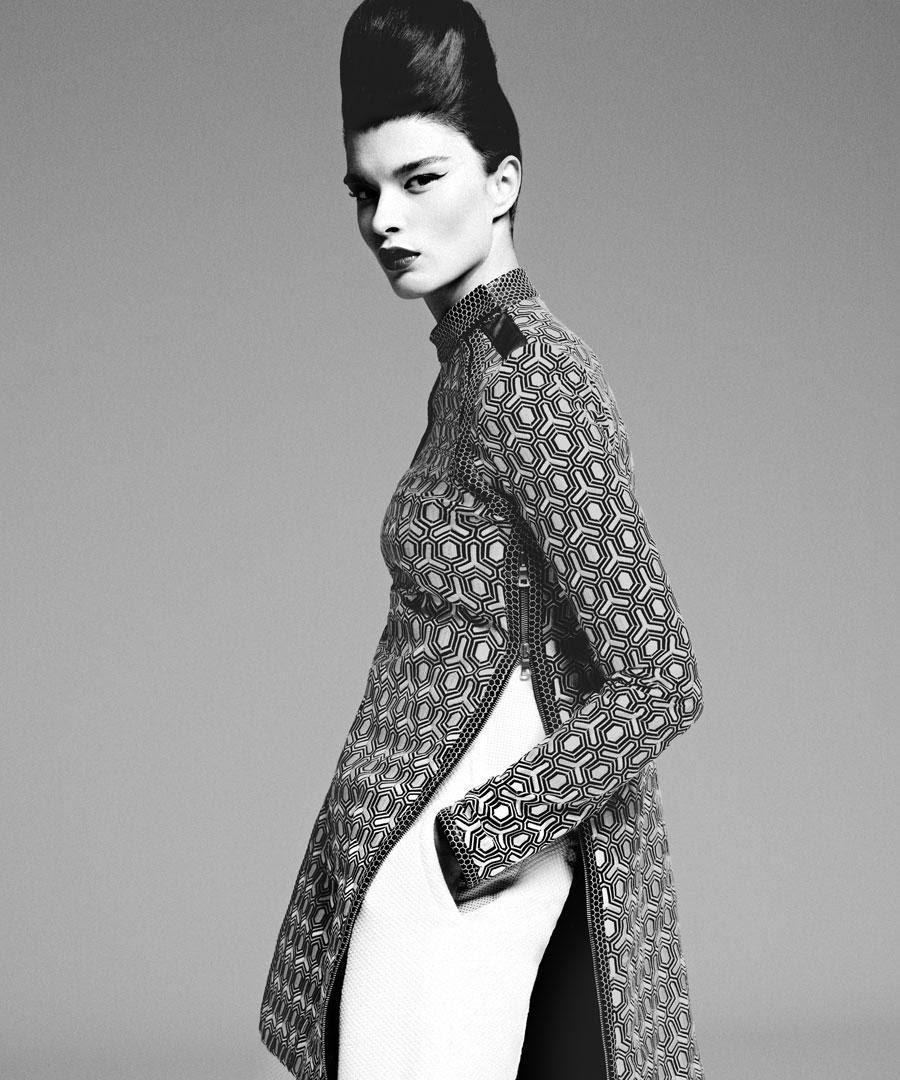 This is the first full-scale shoot that I've worked on that I've seen in print! We shot this back in July at Richard Avedon's former town house which has an actual white-walled studio on the first floor, right next to the kitchen and foyer. Most recently the home was owned by Oliver Sarkozy (sadly, Mary-Kate Olsen did not make an appearance) but is now back on the market for about $12 million (interested?) Obviously the space was amazing, and it was a bit weird to be walking by restaurants and friends's of mine from lower/middle school's apartments while carrying garment bags full of Chanel and Christopher Kane to set. Obviously I'm just an intern, but it was still a bit like "hey, you're actually doing what you've always dreamed of doing."

And even though it's a little bit depressing when the formerly-plus-sized model is skinnier than you, Crystal Renn was such a pleasure to work with. Hers was such a collaborative process with the team, frequently suggesting ways that she thought could make an image even better or requesting a few more takes to see if she could improve upon her work any more than she already had. I've had the chance to work with quite a few models recently, but I can honestly say that she was the one I was most impressed with and the entire day was certainly the best way to kick off the editorial streak (I have quite a few stories I helped out with coming out in the next few months which I will be so excited to share with you!)

On a side note: That girl definitely deserves props for not complaining about the braid she wore in the first image. The hairstylist let me try it on, and it literally feels like someone is trying to yank out all of your hair.

This is Simone Nobili. He doesn't know it yet, but we're going to get married.
He is literally one of the most beautiful individuals I have ever had the pleasure of meeting. Of course, I use the term 'meeting' loosely, since our interaction involved me talking for a good twenty minutes while I dressed him before he responded in a thick (beautiful) accent, "I don't understand. What time is it?"

Sadly, he only speaks Italian, but I am willing to get past that because this boy is seriously stunning. I mean you really haven't lived until you have seen this boy smile (even if the source of his amusement was you accidentally falling whine you try to tie his shoes.) 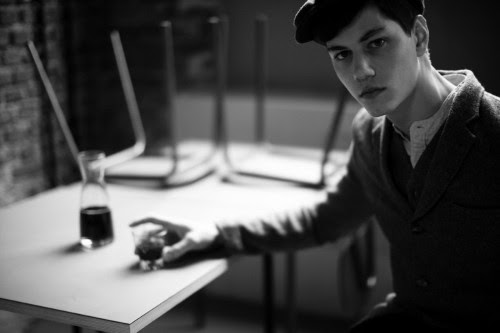 Also, I totally zipped up his pants right before he walked here: 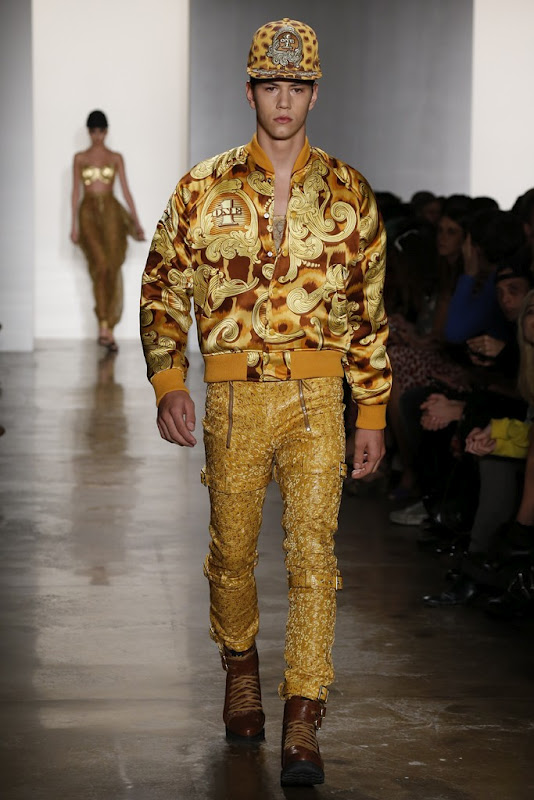