A few months ago, the January 2013 issue of ELLE provided me with one of the proudest moments of my life so far: being able to finally walk up to any newsstand, point to the fashion section and say "hey, I'm in that one!" Before I got a hold of the physical copy of the Jessica Biel cover, I wasn't actually sure if my name (Caroline Mason) would actually appear in the credits or not, so you can imagine how pleasantly surprised I was when I hesitantly searched for the story and found my own name in the fine print.

I am someone who always reads ever single credit in every single story, so even if most readers barely even glance at this little section of the page I'm hopeful that it will register with someone (even if that someone is my mom... Some parents hang up their child's good grades on the fridge, mine put up a tear sheet from ELLE magazine. Whatever.) 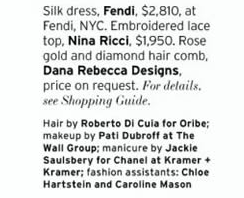 We shot the Bella Heathcote back in October at Pier 59 Studios- the day before I went back home to North Carolina for fall break. It was my first time working with a celebrity/'personality' and thankfully the Australian 'Dark Shadows' actress was very low-maintance and super sweet to work with. It was definitely a good learning experience because, while the general outline of the shoot is remained consistent, the on-set dynamics were quite different from a normal day of shooting. For example, because the story will reflect upon the 'personality' and will register with his/her fans and therefor have some influence on their career, he/she actually has a say in what they are being put in. With a professional model it's a bit like, "here, put this on and stand like this." But that is definitely not the case in personality-driven situations. If they want to hide what they believe to be their flaws (though to us mortals, those so-called flaws are probably toned and trim body parts you and I would die for), then we will respectfully dress them in pieces that conceal said area. If they decide for some reason that they don't want to wear black, then all of our black pieces will be checked out and re-packed into their original garment bags, no questions asked.

The collaboration here is much stronger between the personality (and her PR team/on-set entourage) and the stylist. While it's certainly important that the looks still encompass the stylist's original vision, the 'personality' still has the final say and the ultimate authority. On a normal shoot, however, the stylist is the one who can choose to take it in any direction they feel appropriate while the main collaboration takes place mostly between the model and the photographer in terms of choreographing and creating that final image.

My favorite look from the editorial is the second one with the pink Oscar de la Renta dress and white Giuseppe Zanotti booties. Normally a dress so over the top and feminine would repulse me, but somehow, when balanced out with those cowboy boots, it came out just fucked up enough that I was obsessed. Very Marie Amelie Sauve circa the '90s, no?

This entire fashion week has been such a whirlwind. It was my first full-blown fashion week where I actually had shows to attend and places to be rather than my former tactic of aimlessly wandering around Lincoln Center trying to get a good view of all the action (although there is always room for some good strategic meandering... who hates being photographed and handed free things at every turn?) Although tomorrow is the last official day, we're still in the midst of it all so it isn't quite time to pack up or actually, you know, sleep (although I can't lie- a power nap would probably make me happier than a feature on The Sartoialist at this point.) Overall it's been an experience I won't soon forget and I want to share it with all of you. I promise to do a more complete write up soon, but for now here are a few of my favorite moments thus far... 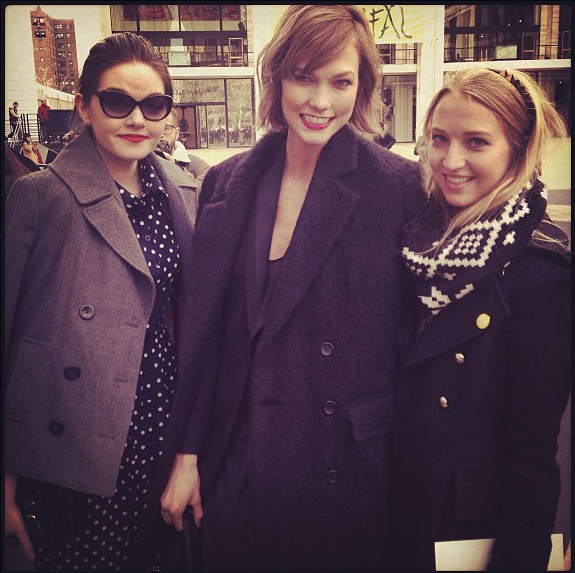 Standing outside Lincoln Center on day 6 with my friend Dakota and my model Karlie Kloss! She is obviously one of the most beautiful girls around, but what's even better is she is also one of the sweetest. It does make me feel a little weird (read: wildly inferior) that she is only two years older than I am. 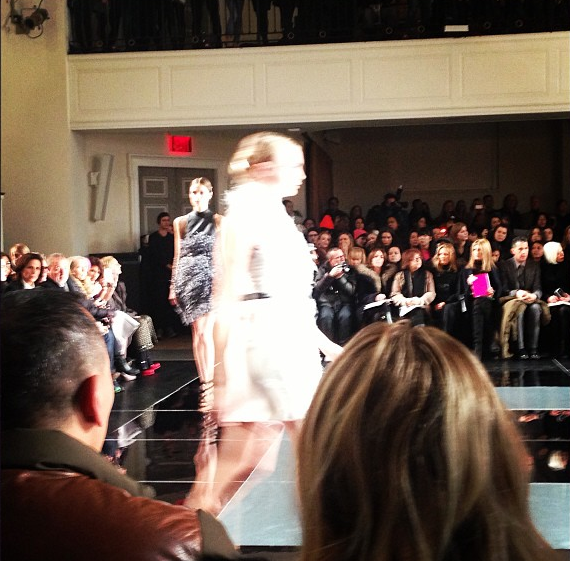 By far the highlight of the week was being able to sit third row at the Jason Wu show. As he is one of my favorite designers, it was a huge honor when my amazing boss let me go in his place. I am a bit of a drama queen at times and I got a little emotional when the lights dimmed, the music started, and the first model stepped out onto the runway. Not to mention the fact that the show venue was literally attached to both the apartment building where I grew up and the preschool I attended. If that's not a sign that I am meant to be pursuing this, than I don't know what is. 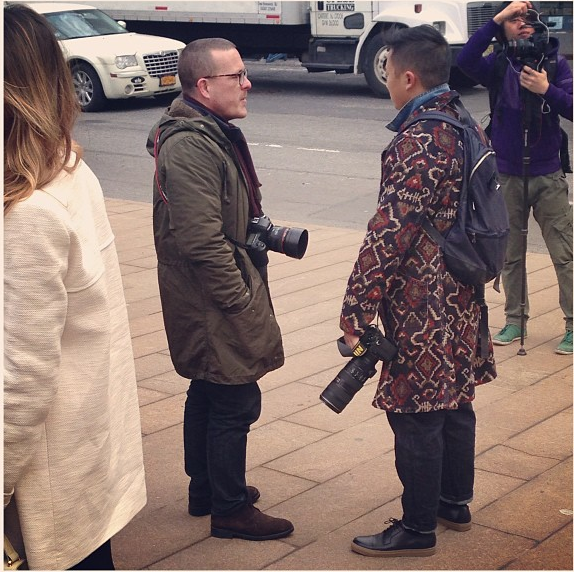 Two of my favorite street-style photographers conversing outside Lincoln Center. For those who are completely in the dark, that's Scott Schuman and Tommy Ton. Being shot by Scott is actually on my bucket list and I'm a little torn whether or not to count my photo bombing about 200 of his shots this week. He may not have had a choice but it happened. 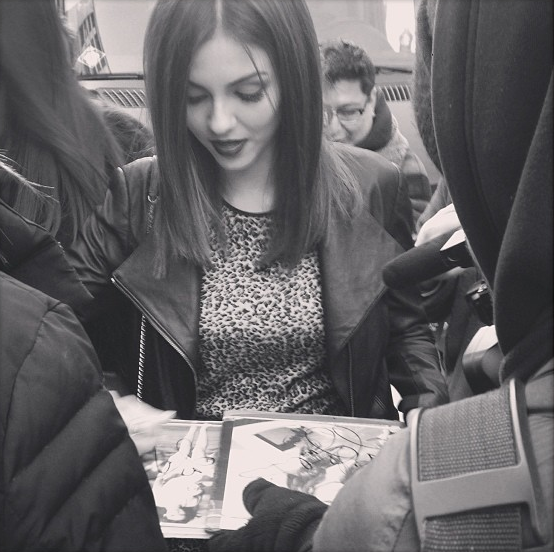 Victoria Justice outside of the DKNY show. #irrelevant 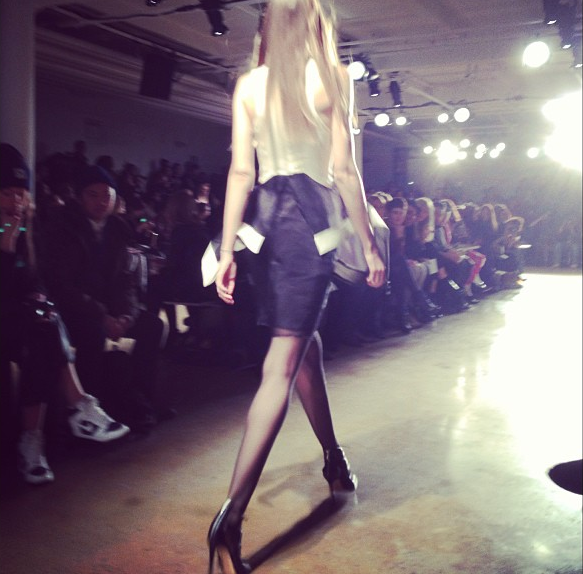 One of my favorite looks at the Ohne Titel show, which was actually my first time sitting front row at a show. I was later offended by my seating arrangements at Maria Cornejo (behind Stefano Tonchi? #rude. So it took about an hour for it all to go to my head.) 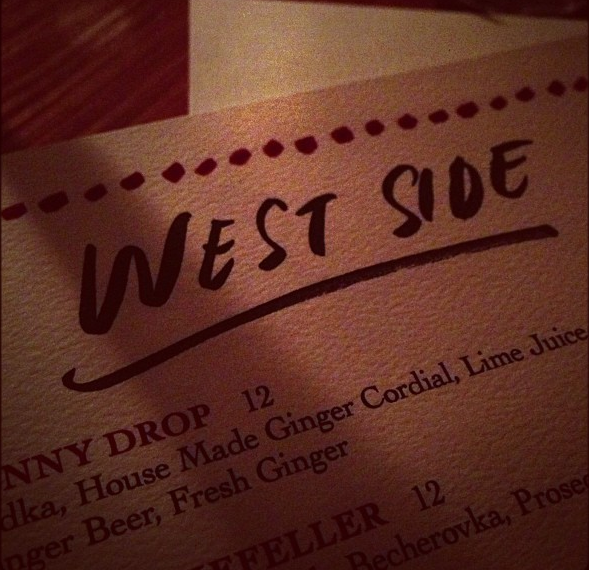 Dining at The Standard on the first night of NYFW has become a tradition with my friends. Though if you're planning on getting all dolled up and are ready to spend a ton of money on food and drinks, I would suggest Indochine instead. Particularly the grilled eggplant, it's heaven. 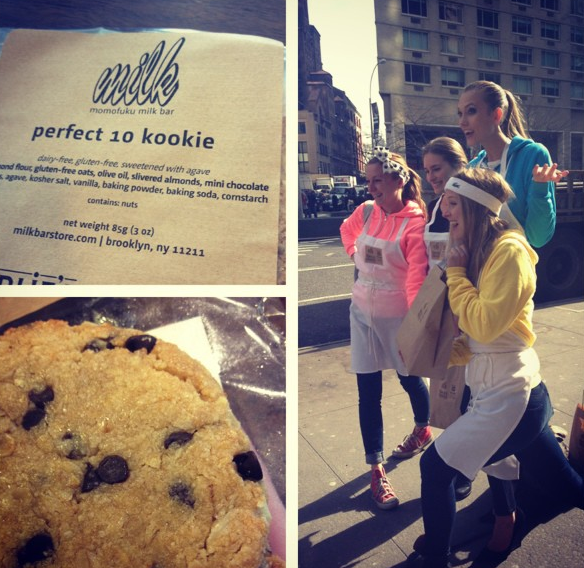 Spotted: Karlie Kloss getting ready to hand out delicious chocolate chip cookies from her infamous Karlie's Kookies line at Momofuku Milk Bar at Lincoln Center. Another highlight of the week? Being introduce to Karlie with relevance. Not so cool? Me accidentally stalking my boss while trying to get my hands on one of these babies (a new non-guilty pleasure.) 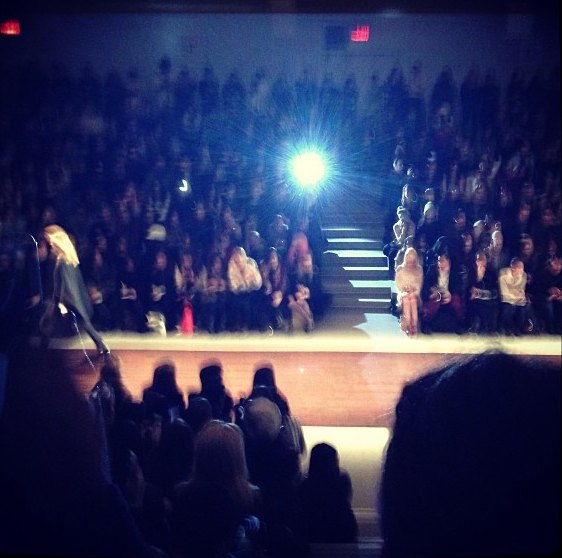 Jill Stuart FW13. While it wasn't necessarily my style, I would agree with how Jane Keltner De Valle described it right after the show. "Very Teen Vogue." 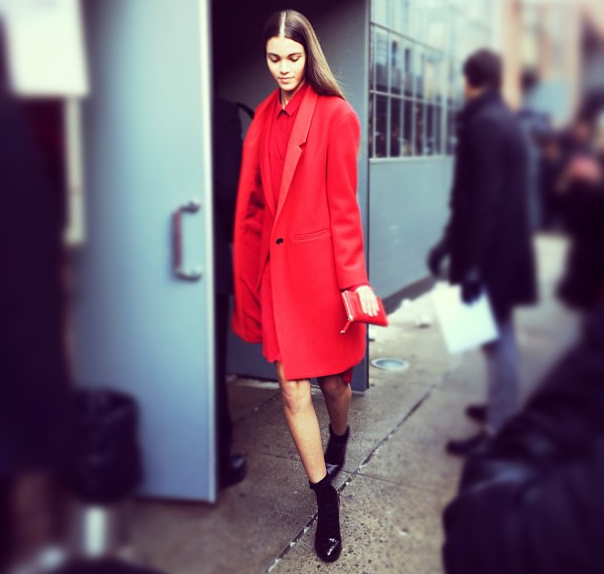 Outside of the DKNY show. The set up was organized in such a way that the models had to run backstage from the runway via this little strip of sidewalk which allowed all of the fans, photographers, and passerby's a decent view of the collection. They even had special speakers set up outside so we could hear the fitting soundtrack: 'Rude Boy' by Rihanna, and a sick remix of the Frank Sintra classic 'New York, New York.' 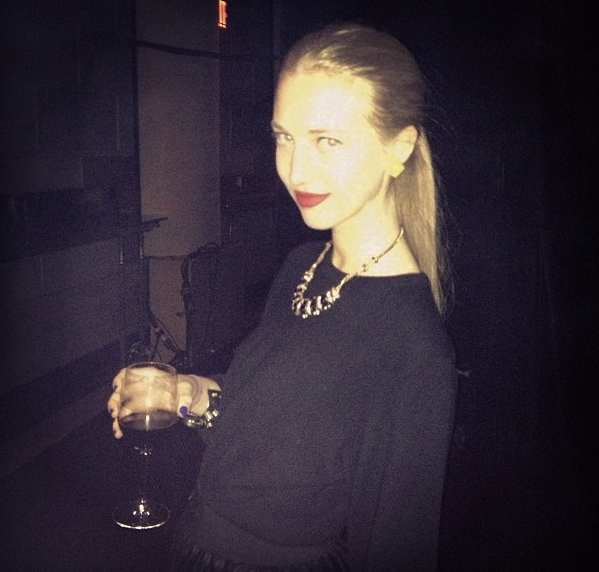 Winding down after a crazy day working the Moncler presentation on Saturday night.  Rocking the"I'm worried they're going to think I'm PR because I'm wearing all black," look complete with my lego earring. 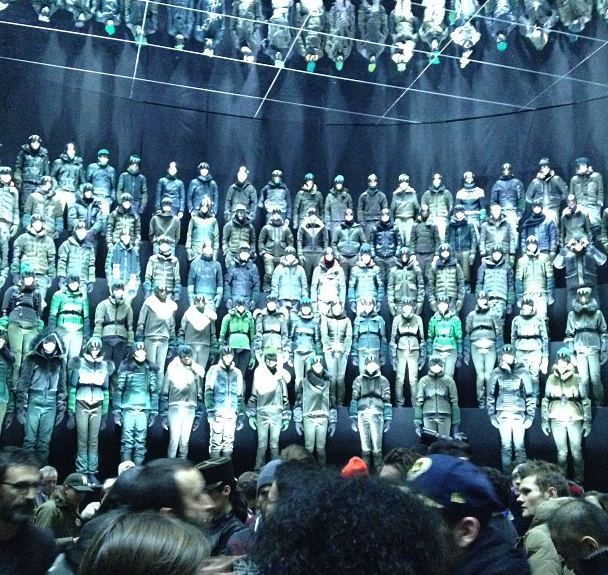 A small portion of the thousand and one models who were a part of the Moncler FW13 presentation. I'm pretty sure none of them were professionals, but there was quite a bit of drama before the guests started arriving. All of those lights glaring down in conjunction with the heavy layers they were wearing caused more than a few of them to faint. Just one glance at the extreme angles that were at work here would suggest that even one model falling down could have resulted in a domino-effect catastrophe. There was also minor incident between a security guard and Linda Fargo that I had to resolve (staff badges apparently give me limitless authority) and I may be living off the two words she said to me forever. 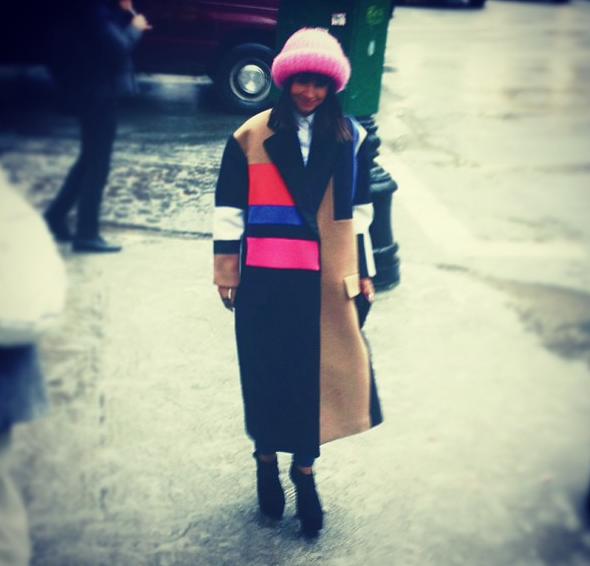 Miroslava Duma, one of my favorite street-style icons, outside of the Jason Wu show. No one does color blocking quite the same and this Russian billionaire/fashion editor.
2 comments:
Newer Posts Older Posts Home
Subscribe to: Posts (Atom)