As the year comes to a close, the Queen of England would like us to all spend some quality time reflecting. Taking a page from Her Majesty’s annual Christmas broadcast, we would all do well to partake in a little look back. But as any good fashion-devotee knows, the most important reflections are not about the regrets or should-haves (I for one, probably should not have eaten that entire cheesecake last week…), rather they are for mulling over the highlights, and occasional lowlights, of the pervious year in terms of the covers. So tomorrow morning, while spending the day in bed recovering from the vats of bubby you are sure to consume tonight (congratulations on your first ‘should not have’ of 2014 by the way) here are a few top picks of 2013 to consider. 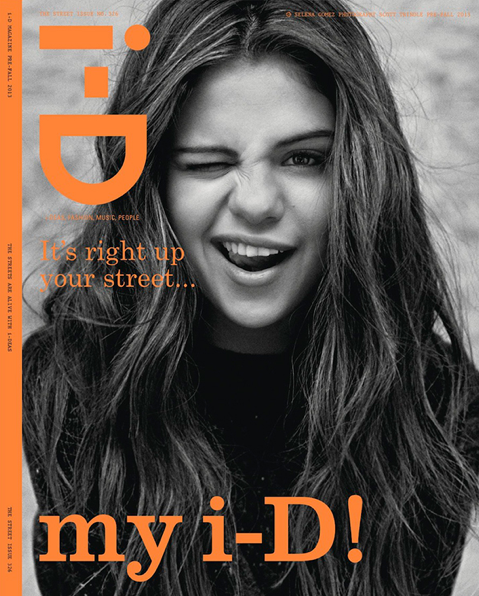 Selena Gomez is all grown-up and dressed down. Initially, I was drawn to this cover by its cheeky positioning of my middle school obsession. The cover moves her into new territory stylistically (reflecting on her new, vampy-er sound projected on the Stars Dance album), but it does so without alienating anyone or pushing things too far à la some of her fellow Disney Channel alumni.

i-D, a publication known for its envelope-pushing, arty audience, was venturing into new space by putting Selena on the cover. Selena is obviously a profitable cover choice, but she is known for her work on more commercial titles like Cosmo and Teen Vogue. It was a risk for Selena as well. Nixing her usual assortment of mini-skirts and body-con pieces in favor of a candid, fresh-faced look was a first for her. "It's so easy to wear incredible, beautiful dresses and look super glamorous, because you have the power of Photoshop," Gomez said. “A shoot that's really stripped-down and raw is really fun to do. I was being rained on, it was freezing, I was covered in a giant sweater and my hair was all over the place. I got to just be in that moment and feel like I was there." 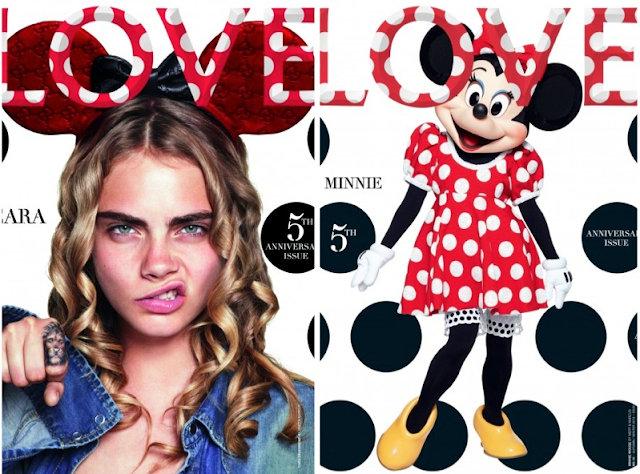 Is there anything (legal) that the fashion industry loves more than to play with references and nostalgia?

This blog could probably be titled ‘A Giant Love Letter to Katie Grand,’ but when she keeps producing covers like this (their 5th anniversary issue), is it really any wonder why she is the object of our affection? For the 10th issue of her bi-annual, Love, Grand produced six different covers, each featuring a member of her famed model posse (a slightly offbeat variation of Alexander Wang’s army circa 2011/2012) and one special guest: Minnie Mouse, the ultimate fashion plate. 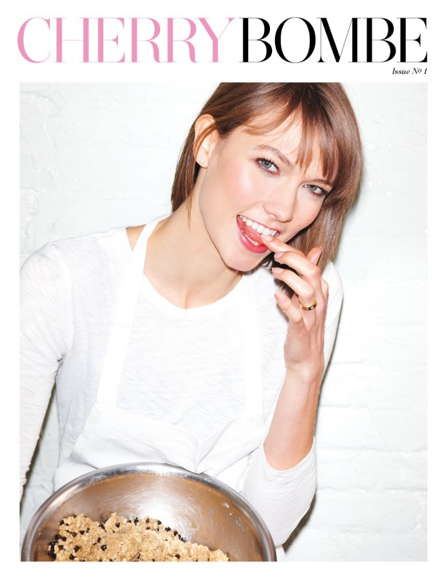 Karlie + Kookie dough... Would I finally get the recipe for her infamously delicious line of gluten-free kookie's at Momofuku Milk Bar?

That was the thought going through my mind when I first saw the cover (their first issue) of Cherry Bombe, the Brooklyn-based publication focusing on the fusion of my two favorite things: fashion and food. The first cover is a decisive step in the inauguration of any magazine, and I applaud CB for going with this choice. While it may not being utilizing Karlie’s posing abilities to their fullest potential, it’s iconoclastic in its own right. I mean, a supermodel in an apron… eating? Quel shocking! It's adorable without being overdone or appearing contrived in any way. Now, the issue has taken up residence in my kitchen and serves as culinary inspiration when all I really want is to make rice for the umpteenth time. 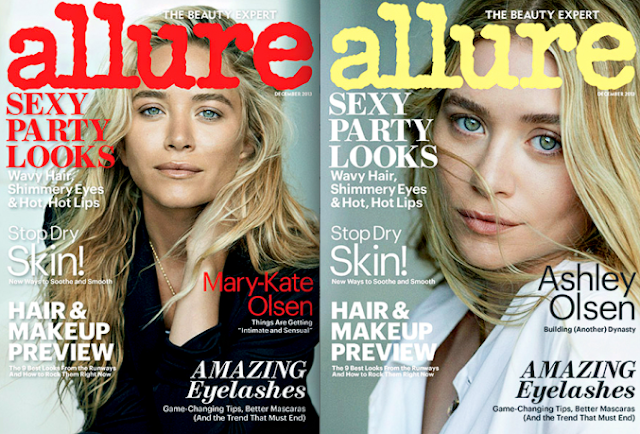 This one may be a bit bias. Dual covers of MK and A are an automatic win in my book.

The twins appear fresh-faced and pretty. Although there really isn't anything particularly special about it (I would have made it a January cover myself), the enclosed editorial is surprisingly chic and well-styled considering the beauty title that put it together.

If I were including online covers in this selection, their spread for Net-a-Porters online mag, The Edit, would easily make the cut. 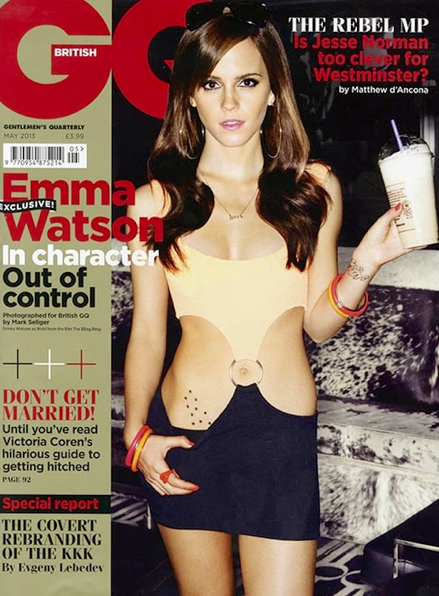 In Ms. Watson’s first cover for the UK edition of GQ, she appears in character as Nicki, the deranged bobble-head she plays in Sofia Coppola’s The Bling Ring. To fully appreciate how iconic this cover is, you need to first see the film and then Netflix Pretty Wild, the single-season reality TV show about the sick family which the movie was based on. (Words can not even describe how fabulously terrible this show was. It is truly a travesty that it only lasted one season.)

Entering and exiting quietly, I was surprised by how little press this cover received. A complete departure from any editorial Hermione Emma has done before (she usually goes for a softer, more feminine look), she channeled her inner Vivian Ward superbly. With those sultry eyes and blood-stained lips set against the metallic lettering and tonal Prada furs, the look strongly echoed Vogue Paris. Another powerful first issue for 2013.

Covers aside, one of the highlights of 2013 was Daria Werbowy’s return to modeling after a break that nearly caused an industry-wide ulcer. Returning in a big way, Werbowy appeared on a number of mentionable covers, but top honors went to her pouting for Vogue Ukraine’s debut issue. 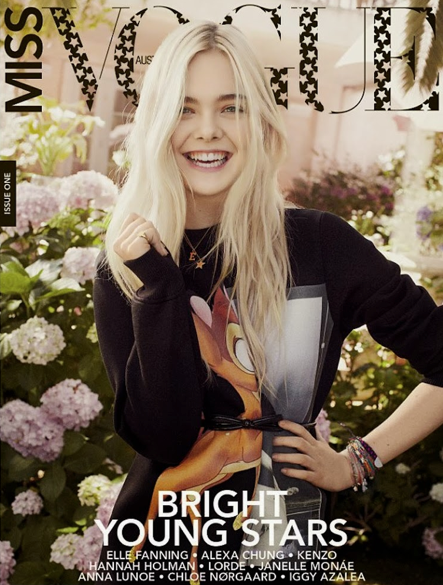 Teen Vogue could take a page from Miss Vogue, the younger sister edition of Australian Vogue.


Gearing towards a younger audience, the cover is quirky and fashion forward in its own right. Elle Fanning, dressed casually in one of Ricardo Tisci's SS13 pieces, exudes sweetness and innocence through that adorable smile. She looks like she is having a great time, a concept that is often forgotten in modern editorials. 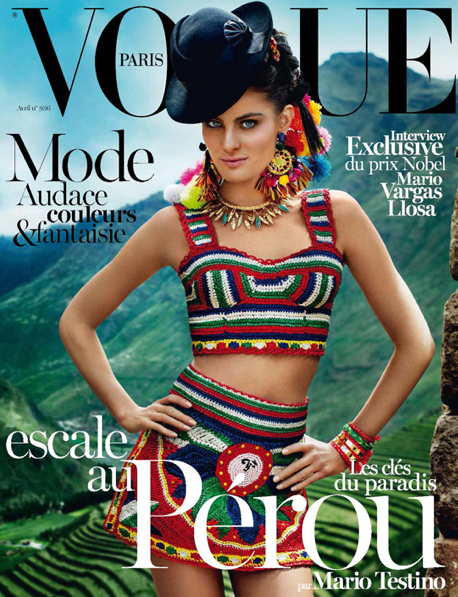 Emmanuelle Alt’s over the top styling + the killer body of Isabeli Fontana + a backdrop set against the mountains of Cuzco (near Testino’s hometown) = one crazy fucking mess of glorious fashion.

It’s a little exotic and a lot tacky – a potent combination when conceptualized by Mario Testino and French Vogue. The cover received mixed reviews when it first came out in April, but despite the naysayers it stood out on the newsstand as one of the only non-studio based shots for spring. Another section of the magazine worth mentioning is the editorial (also shot by Testino and styled by Sarajane Hoare) featuring Kate Moss in a variety of shawls, beads and sombreros.