High Fashion to High School (one year ago)

Bringing Extreme Beauty Trends of the Runway to the Hallway

When it comes to beauty, I find myself unable to master even the most basic of trends. Typically, my routine consists of a dash of eyeliner via Makeup Forever, hair halfheartedly glazed over by a straightener, and a swash of Burt's Bees chaptstick.   During fashion week, I am generally too busy taking in, and forming opinions on the clothes of the runway to really pay much attention to the hair and makeup. Though I usually only skim the beauty sections of my favorite glossies, I had made it a New Year's Resolution to make more of an effort in the make-up department. While pairing myself down and reading a recent article on the spring 2012 beauty trends in V magazine, I began to wonder if the outlandish beauty trends of the fashion industry had a place in a real high school. Questioning led to curiosity and I found myself conducting a social experiment with three featured beauty trends from the runway. What would my classmates say? I was going to have to find out.

Peter Phillip’s, global creative director of Chanel Makeup, decision to put a pink eyebrow on Freja Beha Ericson in Chanel’s fall 2011 campaign was  definitely a stretch for my first trend, but I was ready to hop on board. Unlike the campaign, I was lacking the grey hair dye to execute the total look, but I figured pink eyebrows would be enough to shock the hallways in between classes.In attempt to recreate Phillip’s look, I learned the hard way that eyebrows do not hold hair dye. Manic Panic was absolutely no use. Instead, I put my previously unopened lipstick to good work and traced along my pre-tweezed arches until they became the same hot pink as in the campaign. The idea of changing the colors of eyebrows on the runway was nothing new. Dyed/bleached versions had shown up on the faces of models at Balenciaga and Dries Van Noten, but I was sure that no one at my southern private high school had seen it before.
Throughout the day I received more than a few double takes as the lipstick began to feel heavy on my forehead. Among the various quizzical looks thrown my way, few people ventured to comment on my preternatural statement. Some asked the obvious, “Are your eyebrows.... pink?” Others blurted, the eternally clever, “Hey I think you got some paint on your face in art class.” My favorite, however, were the multiple “What planet are you from?” questions, though I fear some were serious.  Out of the five hundred students that attend my school, only one girl recognized the Chanel influence,. Happily she shouted across my math class, “Oh my gosh, you’re Freja!” Though the look was undeniably fun and made for an titillating advertisement, it was not quite ready for the public. 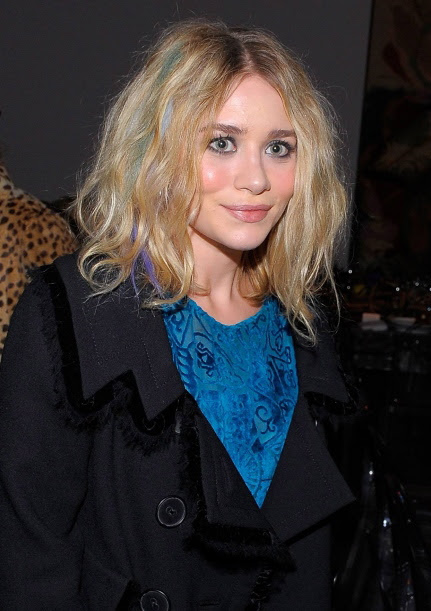 The second day of the experiment came straight from the runways of Narciso Rodriguez, Peter Som and Thakoon: multicolored hair. The trend has become slightly mainstream over the years, thanks to pop stars like Avril Levign and Hannah Montana. Even Ashley Olsen has tested this trend. Choosing a hunter green (dark enough to make sure it did not look like I’ve spent too much time in a chlorinated swimming pool) and a striking blue, I smeared the dye throughout my hair. I felt like I was part the ‘90s Grrrl Power movement or a rebellious teenager hoping to horrify her mother. It was strangely freeing.
I decided that the best way to interpret this trend would be to replicate the effects having taken a highlighter to my head in shades of Manic Panic’s Bad Boy Blue and Green with Envy. Though extensions would have been cleaner, I found that the mess gave it the extra edge needed to make an lasting impact. The look borders a find line between glamour and subversive. Choosing to take grunge route very literally, I paired my new hair with an oversized plaid top and boyfriend jeans reminiscent of Marc Jacobs’ early days at Perry Ellis.
Multi-colored hair was a bit more practical for high school than were the pink eyebrows, as they err on the side of bad-ass as opposed to bad makeup skills. Though the contrast was strong, it took some people a few minutes to even notice the steaks were there as they had a way of falling into place behind the rest of my hair. I received a few compliments from AP Art students and a few requisite strange look from the preppies that occupy the halls at lunchtime. A couple of extremist students asked if the colors were permanent, prompting me to lecture them on the basics of Manic Panic, a virgin concept to them. Overall, the look was a fun prop to style outfits around. Creating various color combinations provided an adequate excercise in color theory. Next time I will be going with purple and yellow, and I might just adopt this as a mainstay into my routine.

Originally my last trend was going to be a bold red lip paired with an all-black outfit. But, by the third day of my little experiment my peers seemed to have been clued in on what I was doing. Instead of going with my original plan, I decided to try something even bolder: a blue color-blocked lip. I had to go out with a bang.
Under the influence of Mary Katrantzou, Richard Chai Love, Jason Wu, and Vivienne Westwood Gold, I went out to buy a tube of “Blue Eve” at M.A.C. My version proved to have a more matte finish than Wu’s and Katrantzou’s glossy finishes, but I figured it would do the job. Taking a tip from Val Garland, makeup artist at Katrantzou, who said, “It is all about odd colors and the rest of the face is very clear and fresh,” I pulled my hair back and forwent all other makeup for the day. Confidence is definitely a necessity for this look, for it was not made for the average among us.
Despite the fact that they must have known what was going on at this point, many of my classmates were speechless when I walked into class with blue lips. Most stared in a mix of awe and confusion while some looked away uncomfortably. Around ten classmates throughout the day asked me if I was trying to look like Ke$ha, a sad reminder of how little people know about the fashion industry outside of major cities or major interest. I even got a few jokes about frostbite and hypothermia. While it did catch some negative attention from others, I must admit this trend brought out the blue in my eyes quite nicely, but ultimately I think it would look best with my costume on Halloween. My verdict? Better left to the runway.

I too, always skip the makeup parts of the fashion magazines, until recently, becoming quite enamored with new lipstick hues and thus venturing into unchartered and adventurous waters ;)

Have a nice day!