One of Chanel’s greatest fortes is how well it is able to translate the glamourous lifestyle of the Parisian woman into a garment. Yet, recently Chanel’s creative director Karl Lagerfeld seems to be moving away from all preconceived notions of the typical Chanel customer. Maybe Karl is trying to attract a younger generation to Chanel; whatever the motivation, the newest face of the iconic brand certainly has the status as teen queen of the Upper East Side to fit the mold of youthful elegance.
Turning his thoughts into actions, Karl Lagerfeld has chosen twenty-three year old California-born actress, Blake Lively, as the official ambassador and face of Chanel Mademoiselle handbags. The “American dream girl,” as Karl calls her, was chosen for her “charming personality and intoxicating ora,” notwithstanding the fact the the paramount role would usually go to someone of European decent. The bag in question is the Mademoiselle, a classic chain strap, quilted double ‘C’, oblong shaped pocketbook which will be available in five different sizes as well as a confounding myriad of color and fabric choices. The advertisement, featuring Ms. Lively are set to break in fashion magazines and online in April.
Karl’s decision should not come as much of a surprise, as Lively has publicly become the obsession du jour of the fashion industry. Christian Louboutin even went so far as to immortalize her in the form of the ‘Blake’ shoe, a strap happy mule silhouette in range hues spanning the rainbow. Anna Wintour and the Kaiser himself have taken her under their powerful wings after falling prey to her charms last summer. Lively, who has made it known on many occasions that she doesn’t believe in celebrities being seated front row at fashion shows as a form of publicity for either party involved, sat front row next to Anna for Chanel’s haute couture show last July. That was just the beginning of fashion’s love affair with the Gossip Girl actress. Wintour put Lively on the cover of the first edition of Vogue’s Best Dressed issue in 2010, despite the fact that her August cover sold the least copies at newsstands. Karl gave her every girls dream by letting her play dress up in a stunning grecian gown, fit for the likes of a modern day Bardot, and taking her as his date to the 2011 Met Gala.
Lively embodies the natural star power and glamour needed to face the storied bag, but rumors around the industry say that not everyone feels this way. Many of Chanel’s employees in Europe are feeling a bit snubbed as the face of such a unique treasure of France isn’t even European, let alone French. Internal sources at Chanel say there has been grumbling behind the scenes, but no one wants to risk their job and say anything to Karl, though many feel that Lively is “off-brand.” But, you have to give it to her, the girl is trying. It’s plain to see that she seems truly ecstatic about her newest role at Chanel and seems to genuinely love the product she will be endorsing. “Though I am the face of it, I will carry it like every girl,” Lively told WWD. “I will always feel it’s more than just a purse. It’s a quilted case full of lipstick, love letters and the dreams and possibilities that I have always felt every time I see that beautiful ‘CC.’ ”
While the ads, shot by Lagerfeld himself, feature as yet unseen dimension of Lively compromising her usual bubbly nature in favor of a sultry, more Chanel version of herself, she seems to have regained her happy and startlingly humble attitude when discussing her role at the brand “How did Cinderella feel when she slipped on the glass slipper? How did Snow White feel when she met her Prince Charming? A dream come true is an understatement. I can say that I feel like the happiest, luckiest girl around.” Sure, it’s a bit cheesy sounding, but it’s just another reason why Karl and the rest of the world have fallen so hard for her positive, self humbling personality.
Lively is taking her role as ambassador very seriously, joining the ranks of fellow ingenious ambassadors Jen Brill, Diane Kruger, and Poppy Delvigne. Among attending Chanel events, so far including two events held in her honor, and carrying her own Mademoiselle bag around town, she is rarely seen without at least one Chanel piece. As her own stylist, no doubt with a little instruction from Karl, Lively expertly works Chanel into the rest of her wardrobe in a way that would make any young woman swoon with envy. Her ability to style a panoply of designers into each of her well constructed looks through the calculated placement of accessories is rightly lauded as she is consistently named a bested dressed contender on nearly every list. Her preeminent versatility of dress gives potential customers proof that Chanel, with a little creativity, can be seamlessly incorperated into the wardrobe of any generation; is that not what Karl was aiming for the whole time? 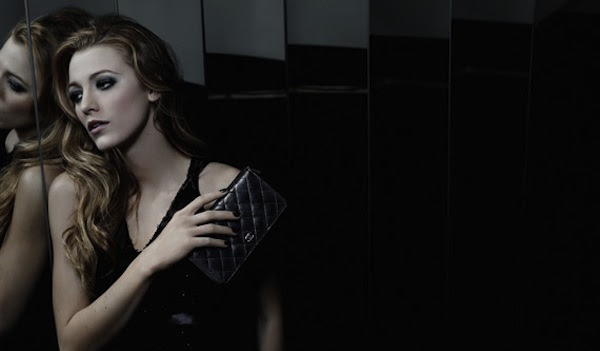