To fete H&M’s most anticipated designer collaboration to date, Versace and H&M took over Manhattan’s Pier 57 to host one of the most memorable events of the year. The coming together of two major fashion players in order to bring the iconic designs to a larger audience was a possibility that the House of Versace’s creative director, Donatella Versace, had vehemently declined in the past. Her view point swayed as she watched many of her predecessors, Sonia Rykiel, Jimmy Choo and Lanvin discover a younger clientele through their own work with the lauded Swedish chain. Versace claimed that she made  felt that such exposure could instrument renewed breadth into their aging customer basis. "I thought this was the right moment to bring out these clothes for a younger crowd to be aware of what Versace was,” Donatella told the Vancouver Sun.
Murmurs of excitement and curiosity echoed throughout the city’s fashion hubs in the days leading up to the November 8th event as people desperately used all of their connections to try and make it onto the esteemed guest list. No one would willingly miss out on their chance to rub elbows with Hollywood royalty and fashion’s elite, nor on the opportunity to enter the pop-up shop without having to forge a campsite on the sidewalks of New York.
The night’s festivities started along the Hudson River at Pier 57’s premiere show space which the Swedish retail chain had rented out and remodeled into‘Versace Hall’ for the night’s proceedings. First came the obligatory step and repeat for the more distinguished of the invitees. Next, guests were escorted through a long, blacked out tunnel into the make-shift cocktail lounge, deliberately resembling Versace’s headquarters in Milan. The wooden runway running through the lounge was specially constructed to ensured everyone front row seating, preventing any unnecessary cat fights from erupting in a room full of huge egos. The overall experience of the venue reflected that of the collection and of Donatella herself: over-the-top extravagance, border-lining on questionable taste.
The fact that there were over five hundred people invited, combined with the fact that no one would willingly miss out on this event, made for a considerably crowded space. The front row felt more like a who’s who of fashion than your average run of the mill sponsored shopping event. The guest list was ripe with influencers including high-wattage attendees Alexander Wang, Susie Bubble, Chloe Moretz, Anna Sui, Blake Lively, Dree Hemingway, and Chace Crawford, nearly all of whom turned up in their best Versace.
Once everyone had the chance to greet each other and settle into their seats, the lights dimmed and out stepped the first model dressed in head to toe black leather. The rest of the show featured the collection on the likes of nearly every current top model: Lindsey Wixon, Abbey Lee Kershaw, Aymeline Valade, Daphne Groeneveld, and many others. Each model was styled like the mother Donatella herself- bleached blonde and the faintly orange. The collection itself was a walk down the Versace archives, focusing especially on their ‘90s heigh-day, with a hint of rock and roll.  While the men’s collection looks fantastic in this setting, there is little doubt that the average male who shops at H&M is going to buy a neon pink suit or zebra printed skinny jeans.
Nicki Minaj and Prince, two legendary icons of outrageous fashion, rocked the night performing in front of a large backdrop prominently displaying the H&M x Versace logo. “To have my friend, the great, the amazing, the one and only Prince, and the extraordinary Nicki Minaj both perform at the event, will create exactly the feeling of joy and glamour I want this partnership to express,” Donatella told WWD. Prince, who began his career around the same time as the the House of Versace was created, danced around in a red pajama suit to his classic hit “Purple Rain.” Nicki, though overshadowed by Prince, individuated herself by dressing up as a palm tree; complete with towering heels and a neon green afro. The palm tree, a classic symbol of the Versace brand, is meant to symbolize the deceased founder, Donatella’s brother, Gianni Versace.
Post show, guests made a mad dash to the small pop-up shop causing a veritable mob scene to break out as everyone scrambled to snap up pretty much anything within reach. “Shopping at Versace x H&M’s pop up store was hysterical,” tweeted internet celebrity, BryanBoy, “We all felt like crazy.” Despite the fact that many of their peers and professional acquaintances were looking on, people were going sample sale crazy- acting like a gaggle of pre-teen girls at a Justin Bieber concert. For those who ran the fastest in their stilettos, the payoff was great- gratifying proof of their attendance in the form of neon hues, studded leather, grunge era leggings, and shift dresses elaborately sprinkled with sequins.
While the event gave Versace the chance to show the collection exactly as they envisioned it, it wasn’t solely about showcasing the clothes. In a time of cheap imitations and designers ripping off other designers, Versace shows the fashion industry what it really means to be an exclusive brand. By bringing the fun back to fashion and  revolutionizes the high street market, Versace proves that high fashion still holds the same weight in the modern age of fast fashion as it did when it reigned supreme in the ‘90s. 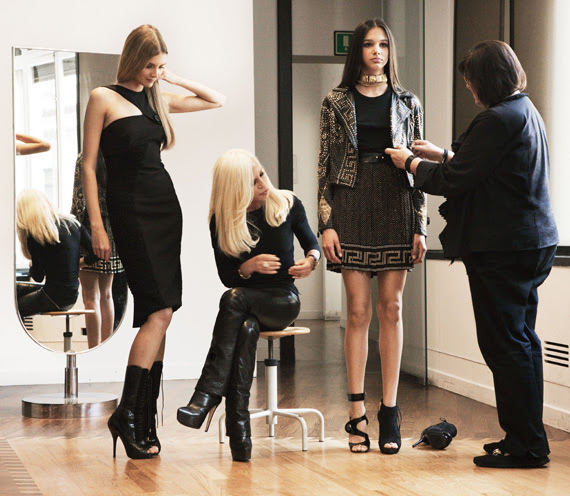 Hello. And Bye. Thank you very much.