On July 11, 2011, I went to the US premiere of Harry Potter and the Deathly Hallows part 2. I don't mean that I was actually invited, that would just have been too easy... I did, however stand outside Lincoln Center and watch all of the people who worked on the film (and SJP) arrive. I know some people had gotten there SIX DAYS ahead (although most people had arrived the night before) but I had to go to work that same morning, so I didn't arrive until about 12:30 or 1 -for the 5PM (actual)guest arrival time. Thankfully, my friend went with me and we had a lot of water to get us through - it was over 85 degrees- and we took turns reading HP7 out loud to each other. But even with all that, it was pretty bad. To get to the front of the fence, it took at least three hours of shoving, small talk, and being pushed up against lots of unattractive sweaty people. I was tempted to leave more than a few times. But we stuck it out because we areinsanely obsessed with Harry Potter (or maybe we're just insane...) and saw what was to the be the last NYC harry potter premiere. Ever. We laughed, we cried, and we even made new friends. And we hadn't even seen the movie yet. 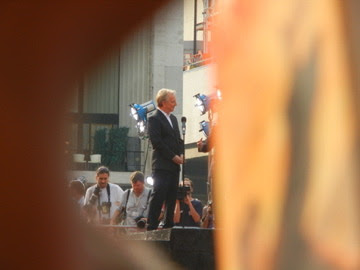 thats so gross totally ruins fashion week stomping grounds for me is there even a theatre inside? :(